JJ GOES ALL THE WAY IN POLAND

Congratulations to Jak Jones on becoming the European Amateur Snooker Champion for the first time in Poland last night.

Just like in the Under 18's event a week earlier, the final was an all Welsh affair, with Jones getting the better of countryman Jamie Clarke 7-4.

The 25th edition of this championship began with a bumper field of 146 entrants, represented by a very healthy 37 different countries.

Jones would have been one of the main contenders before a ball was struck. In round robin Group S he came through in second only behind former champion and Iceland's previous only professional and Crucible qualifier Kristjan Helgason.

Being seeded number 34 for the knockout stages, Jones had to play an extra round, although he was relatively untroubled in defeating French qualifier David Gauthier 4-0.

His route to the final was an exceptionally hard one, next up beating young German prospect Lukas Kleckers 4-2 in the last 64.

A 4-0 success over Malta's very talented Brian Cini followed before reaching the quarter-finals with a hard earned victory against Brendan O'Donoghue (Republic of Ireland), the 2012 runner-up, 5-3.

Former main tour player, Kacper Filipiak, carried much of the host nations hopes of a local winner. Along with Adam Stefanow, both home entrants were still present come the Last 8.

Number 10 seed Filipiak looked on course for a semi-final berth when he led Jones 4-2. But the eventual champion, with no more margin for error, constructed breaks of 54 and 79 in the closing three frames for a 5-4 win.

Petrov had dropped just 3 frames in his 4 previous KO matches, and looked in good shape once again when claiming the opening trio of frames in this best of 11 tie.

However, Jones responded, taking 6 of the next 7 to deny the Eastern European.

This set up a date with friend Clarke, who was having a very successful time in Wroclaw.

After ending the group phase with a 100% record, and only losing four frames in the process, he entered the Last 64 as the joint top seed. From there he highlighted impressive wins against two-time winner Alex Borg (Malta) 5-3 in the Last 16, Stefanow 5-4 in the quarters and another 6-5 deciding frame finish over compatriot Rhydian Richards in the semis.

The final was a tight affair with the pair trading frames throughout the early stages.

Clarke took a close seventh frame to lead 4-3, but Jones would then go on a four frame winning streak to take the title, registering runs of 64 and 68 in the last two frames.

​Jones will now be put forward by the European Billiards and Snooker Association as one of their invites for the World Snooker Tour over the next two seasons (2016/17 and 2017/18). He also pockets 3,300Euros prize money and sponsorship help from the EBSA.

Amazingly, despite his age, it will be Jak's third separate stint on the highest tier of the sport. He has a career victory over Neil Robertson and was within one win of qualifying for the World Championship last year, but was relegated from the tour straight after.

For Clarke, it was yet more agony, as he proved so close yet again to his dreams of achieving full time professional status.

He was also the runner-up last year in Prague to Michael Wild and the following month he missed out in the IBSF World Under 21's final too. Clarke has been extremely close to qualifying for the tour via other routes as well - surely his time will come.

English representation in the event was extinguished at the Last 16 stage when current English amateur champion Michael Rhodes bowed out to Belgium's Tomasz Skalski.

Newly crowned European Under 21's champion Josh Boileau failed in his bid for a unique double when he was eliminated by fellow Irishman O'Donoghue in the Last 32.

Former world number 24 Michael Judge made the highest break of the tournament with a 133 -there were 15 centuries in total.

Many thanks to the EBSA for use of the above photo

Written and published by Michael Day on the 21st February 2016​​​ 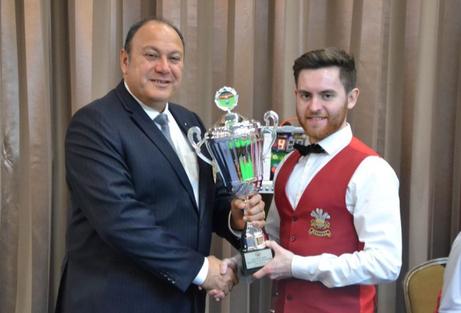