12 days of action in Lithuania were bought to a close with the completion of the team events across three different categories. Consisting of two player teams, Saturday saw the semi's and finals of the Men's, Ladies and Masters competitions.

Despite an age difference of 28 years, the Maltese partnership of experienced professional Alex Borg and teenager Brian Cini took the Men's gold with a 5-3 victory against the Republic of Ireland (3) duo of Brendan O'Donoghue and Ryan Cronin.

As with each section, the format was singles and doubles one frame matches. Despite being back on the main pro tour, Borg had initially entered this event as an amateur before his re-qualification via Q-School last month and was therefore permitted to play.

​Malta had been superb throughout their route to the final. They qualified top from Group E losing just 3 of the 20 frames played. They then eliminated Russia 4-0, Wales (1) 4-1 and Belgium 4-1 in the Last 16, Quarter and Semi-Finals respectively.

The Irish team was also fantastic during the Group Stages; dropping just a frame in 20. However, after seeing off Latvia 4-1 in the L16, they had to survive deciding frame finishes against Israel (1) and Republic of Ireland (2) for their final berth.

The final itself would see the ROI team hold an advantage three times (1-0, 2-1, 3-2) before the southern European island took the glory with the last trio of frames. Borg was the hero after winning all three of his singles ties..

Defending champions of Michael Judge and Robert Murphy (ROI 1) bowed out in the Quarter-Finals after losing to Belgium team of Jurgen Van Roy and Wendy Jans, 4-3.

The Russian Ladies combination of Anastasia Nechaeva and Diana Sirotina further strengthened their dominance of the discipline by taking the title for the fifth successive year.

The pair, who are both in their early twenties, were just unstoppable throughout. They came through their group after winning all 15 frames before easing past Poland (1) 3-0 and Germany 3-1 in the KO's.

They were also fairly comfortable in seeing off Latvia's Tatjana Vasiljeva and Anna Prysazhnuka (they were also undefeated) 4-1 in the final.

In the Masters Division, England duo of Jamie Bodle and Aiden Owens came out on top after a 4-0 whitewash of Republic of Ireland (1) (Nigel Power and Peter Donegan) in the final.

In the Semi-Finals they saw off the Welsh challenge of Darren Morgan and Ian Sargeant in a deciding frame, after letting a 3-0 lead slip. Current English Amateur Champion Bodle beat Morgan in the seventh frame, thus denying his opponent the opportunity of a treble, after Morgan had claimed the European Open and Individual Masters trophies earlier on in the trip.

The English team also edged their Quarter-Final clash with Belgium (1) 4-3. 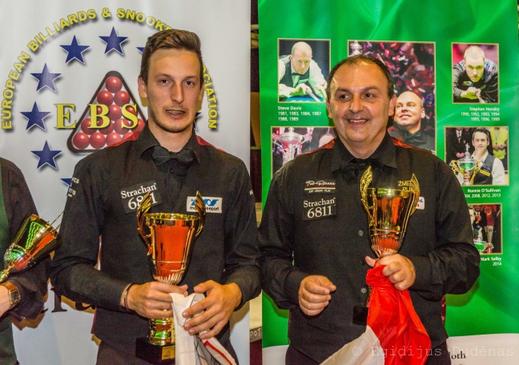