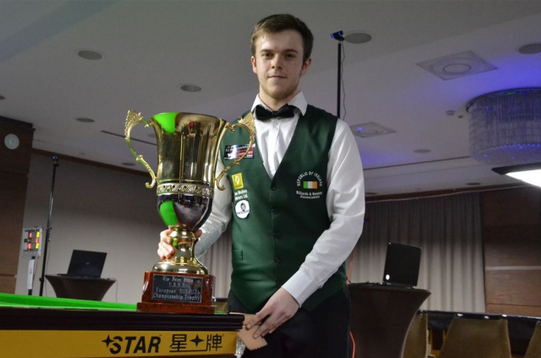 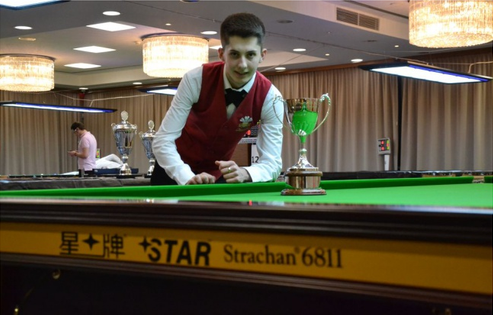 Congratulations to Ireland's Josh Boileau (above) and Wales' Tyler Rees (below) who respectively won the European Under 21's and Under 18's titles in Poland this weekend.

It was finally time for Boileau to claim top honours in an international event after a couple of near misses in the past.

The 20 year old made up for being a beaten finalist in this same event two years earlier, and also for finishing runner-up in the World Under 21's in 2014 too.

81 players from 26 different nations took part in the Under 21's, but come the business end of the tournament, it was pretty much contended between the UK and Irish contingent.

Initially, the field was split up into round robin groups. Boileau coasted through Group N, topping his group with 4 wins out of 4.

​As one of the top qualified seeds he was spared the Last 48 and moved straight into the Last 32 knockout section.

There he made a trio of half centuries to eliminate Patryk Masłowski (Poland) 4-1.

In the next round he would face former main tour professional Alexander Ursenbacher from Switzerland - a fellow hot contender for this crown.

​Predictably the encounter was close - never more than a frame between them, but Josh held his nerve in the decider to come through 4-3.

Andres Petrov (Estonia) was put to sword 5-2 in the quarters before claiming the last two frames in another deciding frame thriller when ousting England's Joe O'Connor 5-4 in the semis.

He would take on more English talent in the final in the shape of Brandon Sargeant.

18 year old Sargeant qualified second in his group and then defeated Vladu Mihai (Romania) 4-0 and Jeff Jacobs (Belgium) 4-2 - recovering from being behind twice.

​In the Last 16 William Lemons (England) led 3-2, but Sargeant registered breaks of 57 and 55 in the last brace of frames to progress.

Tyler Rees (eligible players could play in both Under 18's and 21's) had an even bigger advantage in the Last 8 when he was 4-2 up, but once again Brandon went to the well to win 5-4.

He had a far more comfortable passage in the semis when dispatching Ashley Carty, another Englishman, 5-1.

The best of 11 final began with a long opening frame which Boileau won.

It perhaps set the tone for the clash, as Josh ran out a surprisingly easy 6-1 victor, which included fashioning a 2016 tournament high break of 130 in the fifth frame.

Along with the title, Boileau wins a two year professional tour card on the World Snooker circuit from next season.

He also bags 1,800Euros prize money and 1,200Euros sponsorship from the European Billiards and Snooker Association towards costs in his maiden pro campaign.

Josh Boileau is the first Irishman to take the crown since 1997.

17 year old Rees captured the inaugural edition of the European Under 18's in an event that was pretty much dominated by Welsh cueists.

The tournament would reach its climax on a bumper Friday, which would see Tyler play 4 matches and 27 frames in almost 14 hours of snooker!

Victories over Callum Costello (England) 3-2, Brian Ochoiski (France) 4-2 and Ross Bulman (Ireland) 4-2 would take him to the final.

​There he beat fellow Welsh youth in 14 year old Jackson Page 5-2. Page had beaten compatriot Dylan Emery in the Last 4.

Rees pocketed 1,000Euros and a spot in this year's World Championship qualifiers for the Crucible in April.

For more information and the full results, please visit the EBSA website here.

Many thanks to the EBSA for using their images above.