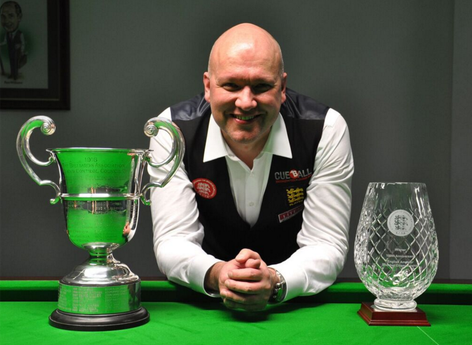 Jamie Bodle held his nerve to claim the 100th anniversary English Amateur Snooker Championship in one of the most entertaining and dramatic finals this prestigious competition has ever seen.

The EAC is one of the most historic snooker events in the World; it even outdates the World Professional Championship which wasn't inaugurated until 11 years later. It has been won by a whole host of snooker royalties and current/ex main tour players.

The tournament is organised by the English Association for Snooker and Billiards (EASB), with the Grand Final showdown between Bodle and Wayne Townsend being the culmination of a series of qualifying heats and regional finals at regular intervals throughout the season. You can find out about the previous rounds here, here and here.

For such a magnificent occasion, the encounter was held at the superb South West Snooker Academy (Capital Venue) in Gloucester and observed by the Chairman of World Snooker, Jason Ferguson. The match was also streamed live and expertly commentated on by ITV and Eurosport pundit Neal Foulds.

Bodle, who competed on snooker's highest tier back in the 1990's, began the meeting as a slight favourite. However, it would be Southern Area champion Wayne Townsend who would make a blistering start.

After taking the first on the colours before doubling his lead in the second, he forced a re-spotted black finish in the third - he duly potted that too. He then crafted a beautiful 76 to go into the mid-session interval surprisingly 4-0 up.

But 43 year old Bodle responded after the break. He deposited Frame 5, and then made a break of 94 (which would be the highest of the match) to reduce his arrears to 4-2.

He also looked poised to cut the deficit even more in the seventh, but managed to miss a rudimentary frame ball blue. Keen to halt his opponent's momentum, Townsend cleared to and including the black for the frame. The younger of the two then followed this up with the eighth to re-establish a four frame cushion at 6-2 going into the evening session.

On the resumption, needing to make a fast start, Bodle chalked up a 45 minute Frame 9 before doubling up in the next with the aid of a 64.

Perhaps the real turning points were in the next two frames.

Needing a snooker with just the colours remaining, Bodle got the required snooker and received the relevant penalty points to get himself back in the frame. After a few tense exchanges, the senior of the duo potted a long pink and black for a real steal.

There was even more drama in the twelfth after Townsend botched an inexcusable pink for the frame; an opportunity his rival took with both hands to level it up at 6-6 - the first time they had been level since the start.

You could have forgiven Townsend for allowing his head to drop after losing the first quartet of evening session frames (similar to what he did in the afternoon), but after the break, he hit back with a 51 to go in front once more. Jamie squared it up again for 7-7, but an 87 by Wayne, and then the sixteenth too, put the Q-School student just one away at 9-7.

However, at the point of no return, Bodle pulled upon all of his nous and expertise to haul himself level with Frames 17 & 18 (where he had a 53) before showing admirable class in taking the last 77-14 for a 10-9 victory. It was the only time during the day that he was in front!

Both will also represent England abroad next season; providing neither qualify for the main tour via Q-School in Burton next month.

Written and published by Michael Day on the 11th April 2016​​