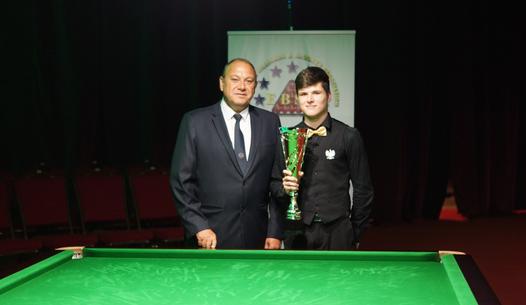 Polish teenager Mateusz Baranowski continues to see his stock rise after he claimed the 2016 European 6 Reds Snooker Championship in Lithuania on Wednesday evening.

The 18 year old came through the rapid two day tournament, which started off with 72 entrants from an impressive 22 different countries.

The field was initially split into round robin groups of 4, with 36 players advancing into the knockout section of the event.

Baranowski qualified second in Group S, his only loss was to group winner Felix Frede (Germany).

High enough up the seedings list, he avoided a preliminary match and therefore started his KO campaign in the Last 32, where he eliminated Maor Shalom (Israel) 4-2.

In the L16 he overcame a 3-1 deficit against 9-time EBSA European Ladies Champion Wendy Jans (Belgium) to win 4-3.

Fellow countryman and former professional Kacper Filipiak was his next victim in the Quarter-Finals after a 4-2 success, he then secured a final berth with a 4-1 victory over experienced Englishman Wayne Brown.

​Kleckers emerged as the table topper of Group K with 3 out of 3, including a win over 2011 Crucible qualifier Andrew Paggett (Wales).

The German had a very tough string of opponents in the knockouts - beating Alex Taubman (Wales) 4-2, Rodney Goggins (Republic of Ireland) 4-2, Brian Cini (Malta) 4-1 and then another youngster in Russia's 17 year old Ivan Kakovsky 4-0 in the Semi-Finals.

The Final was an intriguing affair with Baranowski putting himself one away from glory by taking a 3-0 lead.​ But a determined Kleckers made a break of 67 to get on the board, and then took it into a decider by claiming Frames 5 and 6 as well.

Despite the momentum definitely being with his opposite number, Baranowski somehow managed to reassert his nerve for a 36-23 win in the last.

​The semi-finalists of the event - Baranowski, Kleckers, Brown and Kakovsky also receive the added bonus of an invitation to the SangSom World 6 Reds Championship in Thailand later on this year.

It was terrific to see such a mixture of cosmopolitan talent on display during the latter stages in Lithuania - 9 of the Last 16 where also under the age of 24, exhibiting the potential / future continental Europe may have.

Jans was one of the stories of the competition too; before being ousted by Baranowksi she was undefeated throughout.

The highest break of the championship was an 81 by Paggett - this total was possible due to a freeball situation. The traditional 6 Reds 'maximum' break of 75 was not achieved though; Brown was closest with a 74.

The action in Vilnius now moves on to the European Snooker Open, with the winner also receiving a place in the professional Riga Masters.

After that will be the European Womens, Masters and Teams Championships.​

Written and published by Michael Day on the 2nd June 2016