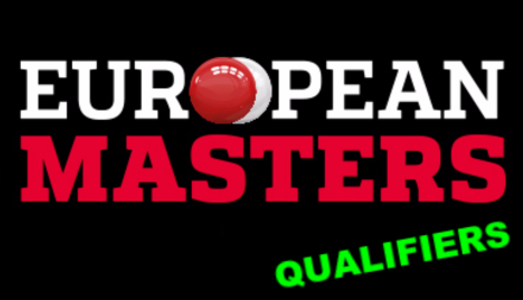 ​MURPHY TO THE MAX! / BUCHAREST BOUND

The line-up for next week's inaugural European Masters in Romania is now complete following the last day of qualifying at Preston's Guild Hall. It would be a very satisfactory day for the majority of star names involved.

Today was of particular delight to Shaun Murphy, who compiled his fifth career maximum 147 break during his comprehensive 4-0 win over Allan Taylor. It is the second perfect frame in the space of just eight days on the World Snooker Tour after Stephen Maguire did it at the Shanghai Masters last week.

New father Murphy, who only just scraped past Fang Xiongman in a decider yesterday, pockets an£11,000 bonus from the rolling qualifying total for his effort. The break is on YouTube - it is one of the most remarkable maximums you are likely to see.

With Mark Selby and Ronnie O'Sullivan's Last 64 matches held over to the venue at the organisers request, plus the withdrawal of Ding Junhui, 11 of the World's Top 16 will be performing at the Globus Circus next week.

The highest ranked casualty was World Number 2 Stuart Bingham, who went out 4-3 to Scott Donaldson. Scotland's Donaldson, who last week nearly knocked out Ding in the First Round in Shanghai, showed his bottle with breaks of 90 and 56 in the last two frames.

The defeat will be disappointing to Bingham, not only because he was in form, but he wanted to return to a venue where he had played in front of a packed house against O'Sullivan in an exhibition last year during his reign as World Champion.

Judd Trump started off with a 114 as he defeated Duane Jones 4-2, whilst Neil Robertson was in his usual powerful scoring mode chalking up runs of 51, 58, 61 and 143 in dismissing Oliver Lines 4-1.

Mark Allen won 4-0 for the second consecutive day (this time over Hammad Miah), and somewhat overseas specialist Ricky Walden booked his flight after rattling in a 117 and 128 in ending the hopes of Michael Georgiou 4-1.

During the morning session, John Higgins produced a remarkable recovery to deny Jimmy Robertson 4-3. Robertson raced into a 3-0 profit, but the tenacious as ever Higgins constructed contributions of 77, 69 and 52 in winning four on the spin. The four-time World Champion had restricted his opponent to just a total of 31 points in that time.

Another person to create a sensational comeback was Michael Wild, who has very much been the 'Master of Brinkmanship' here the last few days. On Monday he turned around a 3-1 deficit against Cao Yupeng - today, he went one better.

Welshman Jamie Jones was looking good at 3-0 up courtesy of a hat-trick of half centuries; however, Wild forced a decider. Jones once again was well placed as he made a 62 in the seventh frame, but a gritty, counter-attacking clearance of 71 sealed it for the World Number 103. It will be Wild's first ever appearance in the Last 32 of a major ranking event.

Elsewhere, there were a number of high quality displays on show.

Possibly the most impressive scoring exhibition was between Graeme Dott and Mark Joyce.

Despite witnessing his lead evaporate, Joyce looked in control of the decider after a 59, only to see Dott compile a determined 54 clearance at the death.

Belgium's Luca Brecel (4-2) and Finland's Robin Hull (4-3) will give the European Masters a continental feeling after they sealed their spots with victories over David John and Gary Wilson respectively. In fact Hull, who had a 100 in Frame 4, trailed Wilson on three separate occasions.

​Michael Holt continued his rich vein of form with breaks of 101 and 104 in defeating Kurt Maflin 4-0.

Anthony McGill swept aside Sam Craigie 4-0 with a trio of fifty pluses. It was McGill's 20th ranking match win this season already; more than anyone else.

Written and published by Michael Day on the 29th September 2016