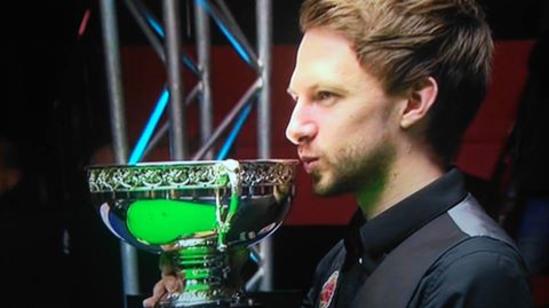 Firstly, you may have noticed I have deliberately kept fairly quiet over the last week in regards to reporting on this tournament. Just like fellow blogger and animal lover @snookerbacker, I have felt very uneasy watching an event held at a venue that keeps wild and endangered animals caged for 'entertainment' purposes. The venue is a circus, yes, and I love snooker, but some things are more important than that.

I know it sounds heavy, but I don't want to support an event that in someway endorses this trade. I will give the competition the benefit of the doubt this year, but unless this practise is stopped next year, or they move to a different venue, I will not watch next time. I understand the organisers agreed to stage the European Masters for three years, provided they don't make a loss from this inaugural edition.

Right, now onto the snooker...

After some very sparse audiences earlier on in the week, understandably, numbers were far more healthy come the business end of proceedings. This may have been helped by the stellar Semi-Final line-up it had.

Despite the demise of clubs and the general UK amateur snooker scene, it is obvious that continental Europe is growing a real affection for the sport. Romania is yet another new country to host a top tier event, and it is great for the continent following the now defunct European Tour.

I'm not sure how World Snooker were ever going to send all 128 players to the tournament (as initially published). An outside table was in action for the Last 32 stage across Monday and Tuesday, although this was in another room at the venue, which felt a bit odd.

One big positive from the scheduling was the fact the entire Last 16 was played on one table in front of the live TV cameras. This was a great opportunity for certain players and I can't remember this happening before in a major ranking event. It did feel similar to an EPTC in Munich a few years back, where the first three rounds were held in the UK and just the last 16 travelled to a one table set-up.

Inevitably there were big name casualties before this stage (Bingham, Murphy) but there was an exciting mixture of talent with half the line-up from inside the World's Top 16 and a quarter of it outside the World's Top 50. Alfie Burden, now into his 21st season as a professional, would reach his second career major ranking Quarter-Final.

The Quarter-Finals were predominantly one sided. Social media went into meltdown with the news that referee Marcel Eckardt had suggested to Anthony McGill that he should quicken up his shot selection during his match with Neil Robertson.

We all love a bit of controversy, but I think this was blown a little bit out of proportion. It was more of a piece of advice between frames than an actual official warning. I must admit I didn't watch the match properly, so can not really comment on whether this advice was justified.

Slow play and shot clocks are periodically debated and are a contentious issue. Whether correct at the time or not, it is perhaps refreshing that a referee has taken a stance on it. Again, I didn't see it, but McGill's name doesn't exactly spring to mind when I think of 'slow' players. It appeared most players and pundits disagreed with the 'call', although Ronnie O'Sullivan, Judd Trump and other well known names from the snooker community felt matters like this should be addressed.

Ouch, I've got splinters sitting on the fence here!

Despite the Best of 7 Frames format up to and including the Quarters (I'm not getting into that debate now either), there was a line-up of Mark Selby, Neil Robertson, Trump and O'Sullivan. A quartet of players with a total of 53 major ranking trophies between them.

On the 10th anniversary of Paul Hunter's tragic passing, it was fitting the Final should be contested by two of the circuits' most entertaining and popular players...just like 'The Beckham of the Baize' was himself.

With absolutely no disrespect to the field, a final pairing of O'Sullivan and Trump was surely an ideal situation for the event organisers.

Trump seriously could / should have gone 4-0 up at the first mid-session interval (partly because of a horrendous kick in Frame 3), but it was 'The Rocket' who went in front 3-1, a lead he maintained come the conclusion of the afternoon session.

On the resumption, Trump came out with real purpose taking the opening three frames to lead 6-5 for the first time in the match. But the tide changed again (Judd could have conceivably strengthened his profit) with Ronnie chalking up a hat-trick of frames of his own to go on the hill at 8-6.

However, the maturity that Trump had shown during his victories against two of the sport's greatest match players in John Higgins and Selby here came to the fore again. With courage and fearless shot making, he compiled his 400th professional ton to make it 8-7, and then forced it all the way with Frame 16.

So, for the third time in their five finals, the match went to a decider. O'Sullivan ran out of position on 5, and when he missed an adventurous long red, Trump stepped up to coolly craft a one visit winning break of 74, despite the pink and black being out of commission for most of it.

Dave Hendon said it in commentary, although he won the UK Championship in 2011, this was possibly Trump's biggest achievement to date. He beat a trio of multi-time World Champions in as many days, and showed resilience against an in-form O'Sullivan with two down and just three to play. It is his 6th major ranking trophy and second in 2016 following his China Open success in April.

​O'Sullivan, a former winner of the European Open in 2003 (held in Torquay, England!), was looking for his 29th major ranking trophy, and in a ninth different country. Whilst he will be disappointed at the loss, the rustiness he had during the Shanghai Masters and Preston Qualifying has most certainly been swept away.

It is always interesting to see how Ronnie reacts from Final defeats, although he has the opportunity to bounce straight back next week with the start of another new event on the calendar; the 2016 English Open from Event City in Manchester.

​​​​Written and published by Michael Day on the 9th October 2016