Continental gold will be on the line in a number of various disciplines as the 2016 European Pool Championships begin in just over a fortnight's time in Austria.

​Around a staggering total of 650 men, women and wheelchair entrants will take part in 8, 9, 10 Ball, Straight and Team Events throughout this 11 day festival of pool. An impressive 34 nations will be represented.

​In the Men's sections, famous Dutch pairing of Niels Feijen and Nick Van Den Berg will be back to defend the 8 Ball and Straight Pool titles they respectively won in Vale Do Lobo, Portugal last year. Whilst a strong Polish side aim to retain the Team Championship they conquered 12 months ago too. Spain's 9 Ball Gold medallist Francisco Diaz-Pizarro is also present to keep possession.

The majority of the traditional European powerhouses will be strong though;

​Finland, France, Germany, Russia and Sweden are just some of the forces sending out big favourites.

Host nation Austria will be keen to perform well on their own stage, and with Mario He and reigning China Open and Mosconi Cup hero Albin Ouschan a couple of the names at the helm, they have a very good chance of cashing in.

Albin's sister, Jasmin, is arguably the star attraction in the female disciplines - she will be attempting to hold onto her Straight and 9 Ball crowns in front of a home crowd.

Sweden's Caroline Roos (8 Ball), Belguim's Kamila Khodjaeva (10 Ball) and Team Russia are the other champions coming back for more glory.

Nearly 20 cueists in the Wheelchair editions will take part, with the formidable Jouni Tahti of Finland (current 9 and 10 Ball Champion) hungry for yet more success.

Ireland's Fred Dinsmore (8 Ball Champion) will be looking to stop him, as will a host of other names who have the ability to go deep too.

Austria last held this event in 2009.

Written and published by Michael Day on the 16th March 2016 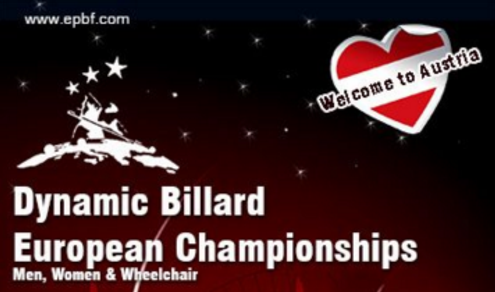