Originally posted on Billiards Boutique and reproduced here with express permission. Many thanks to the BB team! Please visit their shop here.

​​Poland's Mieszko Fortunski lifted his first Eurotour 9-ball title on Saturday after coming through a strong field of over 180 players in Treviso Italy.

The young Pole's previous best result was a third place at the 2014 North Cyprus Open.

His run through the field was excellent as he was unseeded so started in the first round where he bested Garzia of the home nation to set up a second round tie with 4th place ranked Petri Makkonen of Finland. Fortunski's win in this round was a 9-8 victory a scoreline he went on to enjoy a further three times throughout the tournament.

Into the second winners round and Fortunski beat Gerwen of Sweden before coming unstuck against a top Russian in Konstantin Stepanov in the winners qualification round.

The loss meant one more chance to qualify for the knockout stages and he duly delivered with a 9-5 victory over Abdullah Al-Yousef of the UAE.

He then beat compatriot Marek Kudlik (9-8) and Salim-Giasar of Germany (9-6) to reach the quarter finals.

This is where his run got very interesting as he beat current Eurotour number 1 and Mosconi Cup regular, Niels Feijen 9-8 to set up a semi-final against Jayson Shaw of Scotland.

Shaw, now based in the USA, made the trip in order to gain Mosconi Cup points that were on offer at this event. Fortunski battled hard again and won yet another match by the 9-8 scoreline meaning he stepped into his first final where he would face off against German legend Ralf Souquet in the final.

If people thought the pressure would get the the young Pole they were very much mistaken as he bested the German 9-6 to win his first ever Eurotour title.

Mieszko's victory leapfrogged him up to number 14 in the Eurotour rankings where Niels Feijen remains in the number one spot followed by Britain's Mark Gray.

The next event in the series, the Austrian Open, takes place over the weekend of the 14th-16th of April.

Written and published by the Billiards Botique Blog on 1st March 2016. 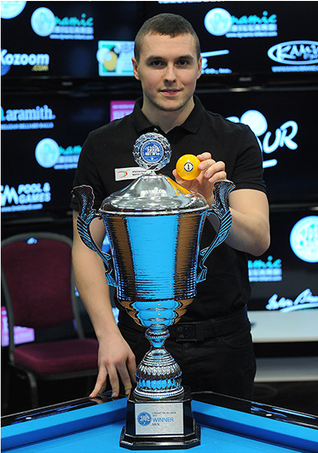