Scotland won the Home Internationals Snooker Championship for the first time since 2002 after one of the tightest finishes in the event's history.

Men's Teams from England, Scotland, Wales (A & B), Northern Ireland, Republic of Ireland and Guernsey travelled to the famous Northern Snooker Centre in Leeds for the 2016 edition of this prestigious annual tournament.

​The champion quartet of Michael Collumb, Robert Carlisle, Ross Vallance and Chris Totten ousted Republic of Ireland by just a single frame after each team ended up on 10 points having won 5 out of 6 matches.

​Scotland began their campaign with a 9-3 win over Wales B before then seeing off reigning champions England 8-4.

They bounced back from a 9-3 loss to Northern Ireland by beating ROI 8-4 and Guernsey 11-1.

​Going into the final morning, both the Scots and Irish had exactly identical records - and even the Welsh A side could gatecrash the party if results went their way.

But Scotland would defeat Wales A 9-3; thus bettering ROI's 8-4 success over England to secure the shield.

Collumb also finished on top of the Individual Stats with a total of 14 out of 18 frames won.

Guernsey's Martin Desperques made the highest break with an effort of 124.

In the Masters Division, the Wales A team (10 points) of Darryl James, Gavin Lewis, Elfed Evans and Steven Thomas took the title ahead of both England A (9 points) and B (8 points).

Aidan Owens (England A) was the top individual performer with 13/15 -  he also constructed the best break of the competition with a 101.

​Picture above is courtesy of Lux Landa. 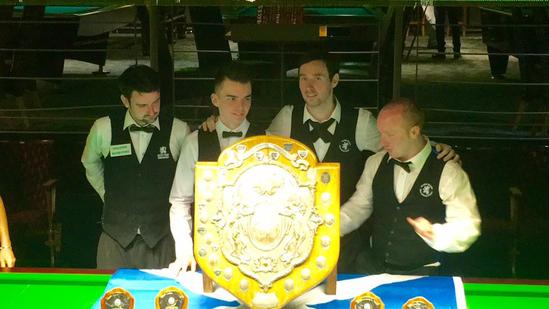