Whilst the majority of the snooker public will be tuning in for the TV stages of the UK Championship this weekend, the 42nd World Amateur Championship continues to take place over in Qatar.

Not only is this the most prestigious amateur snooker title in the World, but the champion will also be offered a guaranteed two year professional tour card.

119 players, consisting of entries from all 6 continents, started out in the Men's Championship. The early stages saw the field split into Round Robin groups with best of 7 frames matches. Unfortunately, because of some late withdrawals, groups were either made up of 3, 4 or 5 players. With so many fixtures to get through, this process took six days.

As usual, the major contenders and pre-tournament favourites relatively breezed through qualifying, although there was an early elimination for English Amateur Finalist Wayne Townsend.

With 3 players from each of the 26 groups making the Knock-Out stages, it meant a Last 78 Preliminary Round was required before the more straightforward Last 64.

We are left with an extremely high quality Last 32 line-up...

​Former professional Issara Kachaiwong compiled a 147 maximum break during his 4-0 win over dangerous Australian Peter McCullagh in the Last 64 on Friday.

Nearly man Jamie Clarke emerged from qualifying as the top seed after winning all three group games without dropping a frame. He does however next face talented 20 year old Cini, who knocked out former main tour player Habib Subah (Bahrain) in a decider.

​Judge, previously as high as Number 24 in the World Professional rankings, will take on 2012 champion Asif, who saw off young Aussie prospect Ryan Thomerson 4-2. Thomerson had compiled a 140 break in the opening frame of that match.

16 year old sensation Yuan Sijun (my pick for the title) in 2016 has whitewashed Martin Gould twice during professional events in his homeland as a wildcard. He will meet the very capable and experienced Chandra next.

​German hopeful Kleckers made the semi-finals in 2015 in Egypt. The 20 year old will clash with a player twice his age in the Last 32.

Defending champion Advani has been untroubled in his progression; winning 20 out of 20 frames so far! It will be a sub-continent derby with Masih, who defeated Welshman Alex Taubman 4-2.

Teenager Sargeant is the sole remaining English representative.​ Since 1999, only one English player has won this championship (Alfie Burden in 2009).

​Thailand have a very proud overall and recent record in this tournament. Ex-pro Tirapongpaiboon will have it tough against Chen, though, who is looking to follow in the footsteps of Zhou Yuelong (2013) and Yan Bingtao (2014).

Dinarvand is the fourth entry from Iran to be left in the race.

​Vatnani had a brief one season spell as a pro, whilst current West Asian champion Shebab had two campaigns on the top tier.

Another ex professional via Q-School was 20 year old Swiss cueist Alexander Ursenbacher. He very nearly regained his card in the summer during the World Under 21's, but missed out in a deciding frame in the final.

There are 19 different countries represented in the Last 32.

For the full results, head over to the International Billiards and Snooker Federation website here.

The picture above is courtesy footage from the YouTube video of Kachaiwong's 147 break. See that here. 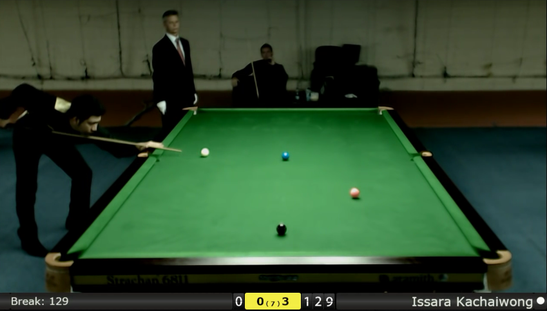