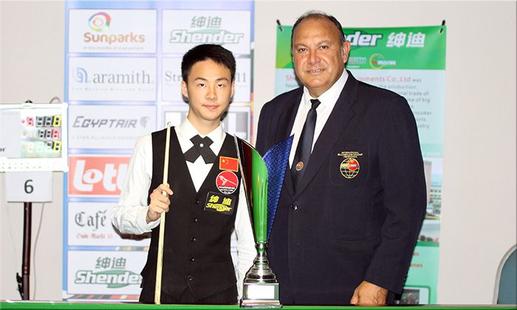 China's Xu Si maintained Asia's recent dominance of the IBSF World Under 21's Snooker Championship by becoming the sixth consecutive player from the continent to win the event. He is also the fourth Chinese winner within the last ten editions.

18 year old Xu would love to follow in those players footsteps as he embarks on his professional career with a guaranteed two year World Snooker tour card as his reward. With the 2016/2017 season now in full swing, presumably his ticket is validated come the 2017/2018 campaign.

Xu began his bid in Mol by qualifying second from Group R, only behind (and having lost to) newly crowned World Under 18's champion Jackson Page (Wales).

In the Knock-Out section he was spared a preliminary round match due to his qualifying record and beat Yun Fung Tam (Hong Kong - the runner-up in the World Under 18's) 4-0 in the Last 64.

First up on 'Finals Day' was exciting German prospect Lukas Kleckers. The European had previously ousted China's Yuan Sijun 5-4 in the Last 8.

Kleckers started the tie well in taking a 2-0 advantage, but Xu found his rhythm by chalking up the next five on the spin.

His final opponent would be Switzerland's Alexander Ursenbacher - another former professional courtesy of a successful 2013 Q-School campaign.

Ursenbacher had finished top of his qualifying round robin and was therefore unbeaten. In the KO's he saw off hopefuls from Australia, Poland, England, India and Hong Kong.

The opening six frames in the best of 11 encounter were shared with just a 67 in Frame 4 by Alexander the only break of note.

​However, a contribution of 62 in the seventh by the Swiss cueist was then followed up by claiming the eighth frame to put distance between the pair; leaving the 20 year old on the brink of a return to the main tour.

With no more margin for error, though, Xu arguably produced his best snooker of the match. He took a high scoring Frame 9 and then registered runs of 59 and 69 in Frames 10 and 11 respectively to deny his opponent in a thrilling climax.

So often, the potential powerful future China could have in the sport is debated.

It is 14 years on since Ding's victory in Latvia and 11 years since Liang Wenbo's in Bahrain. The last Chinese winners Lyu Haotian (2012) and Lu Ning (2013) have subsequently played, and been relegated from the professional ranks.

Time will tell what the future holds for Xu Si; last month he enjoyed a wildcard win over James Wattana during the World Open in his homeland. This is his only previous experience on the top tier of the sport.

An interesting footnote, maybe, is the fact that the last six episodes of both the World Amateur and World Under 21's Snooker Championships have been taken by Asian entrants.

Picture above is courtesy of the IBSF