Sourav Kothari regained the Indian National Billiards Championship, two years on from claiming it for the first time.

India has always been a hotbed for English Billiards, producing some of the greatest 3-ball cueists ever off their conveyor belt of talent.

​The tournament was held in three different stages - first off there was a qualification section for players not already in the main stages.

Then, the field was divided into 16 round robin groups of 4, with the top 2 of each making it to the Last 32 knockouts.

Despite the relatively brisk format (best of races to 150), Kothari was fairly comfortable throughout.

He came through with a 100% record in his group to advance.

The Kolkata player's hairiest moment was against Manan Chandra in the Round of 32 - although he finished on the right side of a deciding 3-2 scoreline.

From there he dropped only one more game in booking his final berth, with wins over Alok Kumar 3-0, S. Shankar Rao 4-0 and Dhjav Haria 4-1.

In the championship tie, Sourav would face maiden finalist Siddharth Parekh, who had earlier shocked the title holder, multiple world champion and competition favourite Pankaj Advani 4-2 in the quarter-finals.

Kothari dominated the best of 9 final from the start, making 3 centuries on his way to an almost unassailable 4-0 lead.

Parekh averted the clean sweep, and briefly rallied with a duo of tons himself in reducing the score to 2-4, but it would be all over in the seventh.

Both Kothari and Parekh will represent India at the Asian Championships in Colombo, Sri Lanka at the start of March - Kothari is also a former winner of that too.

In the Junior event, talented youngster Ishpreet Singh Chadha took the top honour, to go with his national snooker title at the same age level.

Written and published by Michael Day on the 26th January 2016 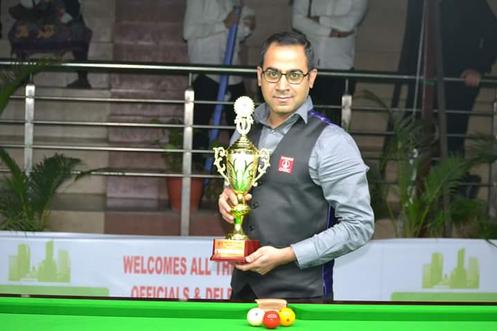