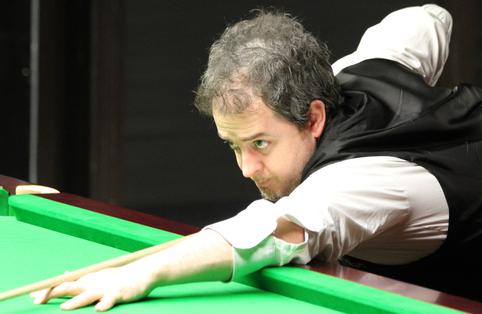 It was a busy opening day of the 2016 Indian Open; with four tables in operation, and a 'roll-on roll-off schedule in place, 17 matches reached their conclusion.

The biggest upset of the day saw Anthony Hamilton eliminate reigning champion (and Birthday Boy!) Michael White 4-1 during the evening session in Hyderabad.

This fixture was heldover from Preston qualifying at the end of May - it was the first time in the Welshman's professional career that he would be defending a ranking title.

Hamilton began the meeting in terrific fashion; getting himself accustomed to the conditions straight away with a 125 break in the first frame.

The 45 year-old doubled his lead with the second before an effort of 61 helped White get on the board.

However, 'The Sheriff of Pottingham' nabbed the fourth on the last black, and then sunk a fabulous long range re-spotted black in the fifth after White had forced the tie-breaker by depositing the last two remaining balls in open play.

It continues the up curve in form for Hamilton, who has notched up some impressive results and performances since the turn of the calendar year. It also possibly serves as revenge for a 5-4 defeat to White in World Open qualifying at the Guild Hall a few weeks ago.

Elsewhere in the heldover / wildcard round, Aditya Mehta - India's only current professional, was dumped out 4-0 by Jimmy Robertson. Mehta was appearing on the circuit for the first time since German Masters qualifying in December 2015 after voluntarily suspending his tour card.

Other locals invitees Kamal Chawla, Manan Chandra and Lucky Vatnani got frames on the board - but ultimately perished, although national Cuesports hero Pankaj Advani advanced to the Last 64 after beating Chinese rookie Fang Xiongman 4-2, despite falling 2-0 down.

In the first round proper, top 16 stars Stuart Bingham and Kyren Wilson held their nerve in deciding frame finishes.

Despite a trio of half-centuries earlier on, former World Champion Bingham needed the seventh frame to oust amateur Steven Hallworth, whilst Shanghai Masters winner Wilson recovered from 3-1 adrift to deny Martin O'Donnell. Kyren made a 125 break in Frame 2 - one of seven century breaks made in total today.

Martin Gould was the only other top 16 entrant in action on Tuesday. He comfortably negotiated Allan Taylor 4-0 with contributions of 63 and 109 in the last.

Oliver Lines' stock continues to increase; a 4-1 defeat of Graeme Dott putting the youngster through to his third Last 32 berth in a major ranking event.

20 year old Akani Songsermsawad was a player I said to look out for this season after a promising start (read here), the Thai upset the experienced Jamie Burnett 4-1 to guarantee himself a payday of at least£3,000.

Another player who is starting to accumulate prize money is Wales' Duane Jones; he chalked up the last three frames in his tie to edge Liam Highfield 4-3.

Joe Swail and Jimmy White have over 60 years experience combined on the top tier of the sport. Their clash here was the 14th time they had crossed cues.

Swail claimed the opener with an 81 break before 'The Whirlwind' squared it up and then produced a 96 to go in front. But the Northern Irishman responded, getting the better in each of the last three close frames for a 4-2 victory.

Stevens started this 2016/2017 campaign down in 44th place - his lowest World Ranking position for 19 years. Yet the former UK and Masters Champion has made a promising start to the season.

Re-returning pro Michael Georgiou was the other happy cueist; he booked his spot in Thursday's Last 32 courtesy of a 4-2 win over Dechawat Poomjaeng.