The Last 32 of the 2016 Indian Open was played out to its entirety on Thursday.

It was very much a case of Deva Ju in the match between Xiao Guodong and Kyren Wilson.

Just like his Last 64 tie yesterday with Jimmy Robertson (which he would eventually cross the line at 4-3), Xiao started very strongly by racing into a 3-0 lead with breaks of 97, 58 and 63.

However, the Shanghai Masters champion responded, winning four frames on the spin to complete an amazing turnaround 4-3. World Number 16 Wilson is already becoming the 'Master of Brinkmanship' this week; he also recovered from 3-1 down against Martin O'Donnell during his first match here on Tuesday.

Kyren's Last 16 appearance tomorrow will be the fifth time in the space of a year he has reached that stage of a major ranking event. Once again bolstering what a life changing 12 months he has had.

Someone featuring in the Last 16 of a major for the first time will be youngster Oliver Lines, who broke new ground when defeating Andrew Higginson 4-2. Oliver posted top runs of 59 twice.

Gary Wilson hasn't really capitalised on his fantastic run to the final of the 2015 China Open. In fact, he will be under some pressure later on this season when that prize money gets taken off his ranking total. But the English cueist is certainly making amends so far this season, he advanced again with a 4-2 victory over Anthony Hamilton.

​Wilson looked comfortable with a 3-0 advantage before the experienced Hamilton counter attacked with efforts of 127 and 69 in the next two frames. The current World Number 43 held his nerve, though, with a 70 in the last. It is the first time he has reached this stage of any ranking competition since that run in Beijing 15 months ago. Wilson will now play surprise Thai package Akani Songsermsawad, who upset Mark Davis 4-2 - both players had a brace of 50 pluses.

Anthony McGill and Matthew Selt played out a quality affair where there were six half century breaks in as many frames. Despite Selt getting in first with a 51 in Frame 6, McGill sealed a 4-2 win with a responding effort of 83.

Of the seven top 16 stars who started the day in India, five progressed.

Pre-tournament favourite Shaun Murphy nearly followed them out of the exit door, but held himself together in a seventh frame finish over Michael Georgiou. Murphy is looking for his seventh major ranking trophy, and his second in Asia after his 2014 World Open glory in China.

Martin Gould set up the first all top 16 clash in this year's tournament with the before mentioned Wilson, after seeing off Jamie Jones 4-2. Barry Hawkins began with breaks of 102 and 58 as he dismissed Rory McLeod by the same scoreline.

Stuart Bingham had to survive his second successive decider this week; winning the last two frames against Matthew Stevens.

Despite the close proximity of the outcome, the current World Number 2 was again in great scoring nick, fashioning runs of 59, 78, 113 and 81. He also had a hat-trick of half centuries in his first match.

​Stevens himself made 80 and 58, in what was arguably the match of the day at the HICC Novotel.

Home nation hopes were erased when Pankaj Advani bowed out 4-3 to Stephen Maguire in surely the most exciting climax of the day's action.

The reigning World Amateur Champion took the opening frame before the Scot notched up runs of 63, 62 and 51 in consecutive frames to move one away at 3-1.

​Advani held on by claiming the fifth and then the sixth frame - where Maguire had the opportunity to end it, but agonisingly lost out on the last blue in an hour long decider after both had chances of varying difficulty.

Former World Champion Peter Ebdon's 9 ranking titles have come at fairly regular intervals since his inaugural win at the 1993 Grand Prix - although his last success came in April 2012, his longest barren spell. A third of those have been in this continent. He continues to slip under the radar with a comfortable 4-1 elimination of Duane Jones.

Ebdon is now the highest ranked player left in the second quarter of the draw.

​Robert Milkins rattled in a 140 - the second highest so far this week, during a 4-1 success against Joe Swail, veteran Nigel Bond enjoyed a 4-2 outcome over Sam Baird and in-form John Astley triumphed by the same result when he faced Robbie Williams.

The Last 16 and Quarter-Finals will be played out on Friday.

Written and published by Michael Day on the 7th July 2016​​​ 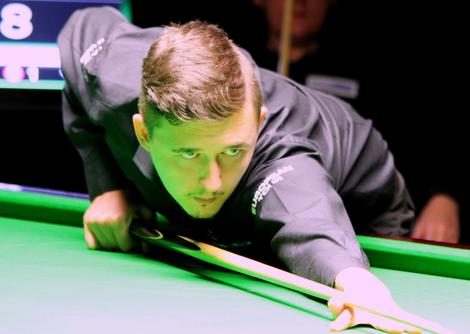