Less than four weeks on from Mark Selby lifting his second World Championship title at the Crucible Theatre, the new professional snooker season gets underway on Saturday...and we're not even officially into the summer yet! This is now a full time tour; a reminder of how times have changed for the better.

The curtain raiser to the 2016/2017 campaign is a World Ranking qualification triple header at the iconic Guild Hall. The opening rounds of the World and Riga Opens will also take place here over the next eight days, but first up is the Indian Open, which will be this bank holiday weekend's action in Preston.

Having its inaugural staging three years ago, this tournament was omitted from last year's schedule in order to accommodate a more suitable position on the calendar (and possibly for future editions). Previous winners include Ding Junhui (2013), and defending champion Michael White (2015) - who will have his encounter with Anthony Hamilton held over to the venue.

Talking of venues, it will be the third different location for the main stages of the event. Originally moving from New Delhi to Mumbai, its new home will be in Hyderabad between the 5th-9th July.

We begin with a flat structured 128 player draw; and just one round of qualifying. As with the previous editions, the main bulk of the competition looks likely to be contested over the best of 7's, with the final just the best of 9. Not ideal for many involved, but at least it's happening.

Somewhat predictably, the timing and nature of the 2016 Indian Open will see a rather large absence of top tier stars; half of the world's top 16 have declined to enter. These being Mark Selby, Judd Trump, Neil Robertson, John Higgins, Mark Allen, Ding Junhui, Ronnie O'Sullivan and Joe Perry.

Disappointing maybe, but certainly not a surprise. The Australian Open (which in recent years has been played around this time instead) also had the same problems. Perhaps the £300,000 prize purse being distributed in India needs to be upped in order to entice everyone?

The highest ranked entrant is World Number 2 Stuart Bingham (who may play freer without the tag of reigning World Champion now?). He begins his bid against recent Q-School graduate Cao Yupeng.

​2015 runner-up Ricky Walden plays Zhang Anda, whilst Shaun Murphy, the only other member of the current top 8 to appear, faces yet another Chinaman in the form of Lu Chenwei.

Currently India's only professional player, Aditya Mehta will perform in front of his home fans after his match with Jimmy Robertson was also postponed to the venue.

Decorated multi time Cuesports World Champion, Pankaj Advani, is also likely to be involved as wildcard there too.

​Jimmy White will start an incredible 37th season as a professional against Ali Carter on Monday evening as well.

​​​​​​For the full draw and schedule, please visit the Indian Open tournament page on snooker.org here.

Written and published by Michael Day on the 27th May 2016 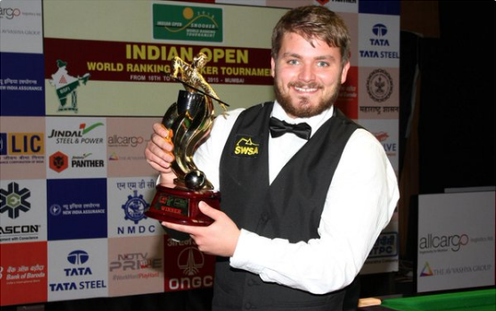