It was another busy day of 2016 Indian Open qualifying action at the Guild Hall in Preston, with no less than 22 more players booking their berths for the main stages in Hyderabad during July.

Former World Champions Mark Williams and Graeme Dott made it through; although each had contrasting fortunes in achieving qualification.

Williams rounded off a 4-1 defeat of fellow Welshman David John with a 110 break, whilst Dott recovered in claiming the last two frames to negotiate Scottish compatriot Michael Collumb 4-3; an amateur Q-School top-up entrant.

Ricky Walden found a rich vein of form towards the end of the 2015/2016 campaign, he also reached the final of this tournament's last staging in Mumbai the season before. The World Number 8 will be back on the sub-continent after he eliminated Zhang Anda 4-1, aided with contributions of 80 and 77.

There were also victories for current top 32 stars Robert Milkins, Ryan Day and Luca Brecel (who made a 105).

​The highest ranked player to be axed on Sunday was World Number 29 Michael Holt.

Holt would fall victim 4-1 to Mitchell Mann, the youngster building on his success of qualifying for the Crucible only last month. The 24 year-old fashioned runs of 53, 73 and 51 on route.

The most exciting and dramatic finish was amateur David Lilley's 4-3 win against Tian Pengfei. ​A 3-time English Amateur Champion, but never a professional, Lilley secured qualification to his first ever main venue on a re-spotted black in the deciding frame!

Ashley Hugill has previous form knocking out professionals from World Ranking events; the 21 year old amateur stunned an in form Neil Robertson during German Masters qualifying at the end of 2015.

The Englishman was at it again today in denying Ross Muir - coming back from 2-0 down for a 4-2 success.

Since being relegated after the recent World Championship, Michael Georgiou has made an immediate return to the highest tier of the sport by coming through Q-School in Burton only seven days ago. Georgiou celebrated by ousting the experienced Fergal O'Brien 4-3.

Another name returning to the main tour was Elliot Slessor; he too hit the ground running with an impressive 4-2 defeat of Thepchaiya Un-Nooh. Slessor had emerged as one of two EBSA play-off winners at Ponds Forge in April.

​Possibly the performance of the day goes to Daniel Wells, the World Number 87 rattling in efforts of 50, 58, 90 and 81 in whitewashing Darryl Hill 4-0. Last season's 'Rookie of the Year' Hill was restricted to just a total of 43 points throughout.

Jack Lisowski and Mike Dunn each notched up a trio of half centuries in disposing of Michael Wild and Ian Preece respectively.

Written and published by Michael Day on the 29th May 2016​ 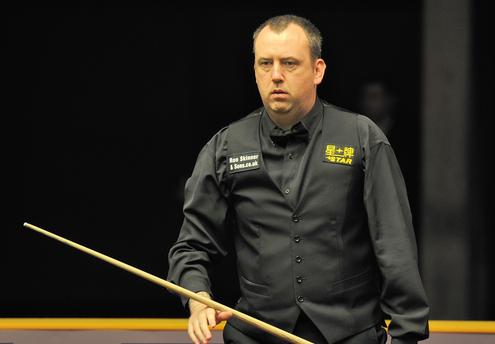