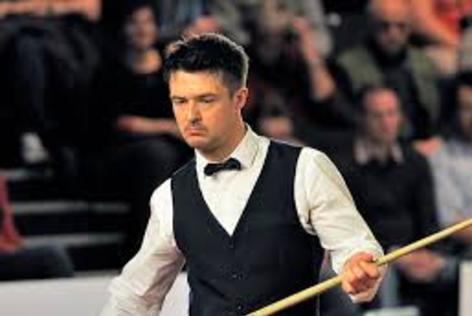 OH MY, WHAT AN OCTET!

After four days of busy action, 64 of the 72 players who travelled to Daqing have had their hopes of a £125,000 payday extinguished. We're down to the business end – the Last 8. And what a high quality quarter-final line-up we have in store with a quartet of World Championship winners alongside Ding Junhui, Judd Trump, Joe Perry and Michael Holt.

Without disrespect, the starring cast would have been even more notable if it wasn't for the late eliminations of Neil Robertson and Ronnie O'Sullivan during Wednesday evening's session.

Now in its fifth edition, the International Championship (with its longer format) generally sees the top players make the latter stages. In fact, 12 of the Last 16 line-up were from the World's Top 16. We'll run from the top to the bottom of the draw...

John Higgins v Ding Junhui
Defending champion Higgins was one of four players who had their First Round matches held over to the venue. Four matches in four days for the 41 year old? No problem.

Higgins has dropped just seven frames so far. His most recent win on Wednesday was a relatively routine 6-2 victory against hot property Zhou Yuelong; the Chinese teenager is steadily making progress in the pro ranks.

Whilst the Scot claimed three ranking titles in 2015, his last one was this one twelve months ago. He is trying to secure a spot in the lucrative Champion of Champions in Coventry next month.

Ding is kind of free-rolling here having recovered from 5-2 adrift to beat Mitchell Mann 6-5 on Sunday. It seems obligatory that Ding must struggle in his opening match of events in China nowadays!

Since that massive scare, the 2013 victor progressed with plenty to spare against subsequent opponents Chris Wakelin and Matthew Stevens. 2014 champion Walden forced a deciding frame climax against him, but the Asian held on for a narrow success.

Ding has a positive head to head career record over Higgins...not many players can boast that. He has also won their last four meetings.

Apart from his L64 win over Yuan Sijun, Trump has been kept low key on the outside tables since.

To make the quarters, JT held off a spirited and resurgent James Wattana (who was appearing in the Last 16 of a major ranking event for the first time in over a decade) 6-3. He made consecutive runs of 137 and 133 either side of the mid-session interval to turnaround a 2-1 deficit.

Judd remains on course for a hat-trick of major ranking finals on the spin.

​​Perhaps preoccupied by being a father for the first time, Murphy has had an uninspiring few months on the baize with exits before the Last 16 stage in Shanghai, Bucharest and Manchester. Maybe close calls against Robin Hull (6-4) and Yan Bingtao (6-5) here put him in good stead to defeat Sam Baird 6-1 today. Against Hull and Yan, 'The Magician' trailed by a brace of frames.

Out of the seven ranking events this season so far, there have been seven different winners. Murphy could certainly be a candidate to continue that sequence.

The most comfortable route of all remaining players is that of Bingham's. A 6-1 win over wildcard Zhang Jiankang was followed by a 6-2 success over Dominic Dale and a surprisingly cushty 6-1 defeat of Ali Carter. In stark contrast to the start of his World Champion season last year, Bingham has been knocking on the door with Semi-Final finishes in the Shanghai Masters and English Open. He was also denied on the final black at the World 6 Reds in Thailand.

Michael Holt once again stopped the Ronnie O'Sullivan party when beating 'The Rocket' for the third time in the space of eight months as a result of a 6-3 victory. Ronnie had been under par during his opening two previous matches as well, but Holt played good matchplay snooker to secure his third QF this season already.

You kind of expect the model of consistency himself, Mark Selby, to still feature at stages like these.

As well as consistency, another of the World Number 1's strengths is his doggedness and determination. In his heldover tie, Paul Davison gave him plenty to think about before sealing a 6-4 win, whilst recent maiden major winner Liang Wenbo was ousted in a decider during today's Last 16. The World Champ was one down with two to play there.

For someone of such class and solidness (is that even a word?), Selby's record in this tournament is relatively average. A semi-final run here last year is his best effort to date. He'll be looking to adjust that stat come this weekend.

Perry repeated his success from July's World Open to dismiss friend Neil Robertson 6-2 on Wednesday. However, it could have been another early bath for the current World Number 11 after his first match here - he managed to come back from 5-3 down to beat Andrew Higginson in 11.

In his last three tournament outings Joe had lost at the first hurdle. With a chunk of money being taken away later this campaign from his rankings due to his 2014 Players Championship win, a run here is very welcome.


Wildcard Woe
Wildcards were once again a hot topic on Sunday after all four home nation invitees eliminated current main tour professionals. However, only Xu Si, the newly crowned World Under 21's Champion, made it to the Last 32 before bowing out to Wattana. Xu will take his place on the top tier next season courtesy of his victory in Belgium during August.

Are they unfair? It seems they will always be a part of overseas events, and therefore part of the professional package. Veteran Darren Morgan was given a wildcard during June's Riga Masters – the Welshman made the most of it by going all the way to the Last 4. However, he did win an EBSA amateur event where that was included in the prize.

Goran Ivanesevic finally won Wimbledon as a wildcard in 2001, and in snooker, the obviously example is Ding winning the 2005 China Open as a fresh 18 year old.

Ding was also awarded a wildcard into the Masters two years running (2004/2005). He perhaps benefited playing in a big event on live TV in the UK at such a young age.

​If events like these are dependant on invitational wildcards, then so be it. I should imagine the players would certainly understand that (as it's their livelihoods), and at the least, it's not as bad as a few years ago when we had double the amount of them.

I think the real gripe is the fact that the drawn professionals have to play an added match at the venue; they've already come through one round of qualifying to be there. Could wildcards be incorporated into the main draw themselves? What about the top ranked players being made to play one of them instead?

Let me know your thoughts, and who you think will win the biggest tournament of the season so far...

Written and published by Michael Day on the 26th October 2016​​