​The 5th International Championship from China gets underway during the early hours of Sunday Morning.

Besides matches involving Higgins, World Champion and Number 1 Mark Selby and the host nation's Ding and Liang Wenbo, everyone else had to overcome a round of qualifying at Preston's Guild Hall a few weeks ago. Read about qualifying here.

In the past, the venue stages of this tournament has suffered with big name absentees failing to negotiate that initial qualifying round. On this occasion, I'm sure the organisers, sponsors and broadcasters are relived to see only two of the World's current Top 16 (Mark Allen and Barry Hawkins) missing.

Ronnie O'Sullivan is currently in the mood for competitive play this month having reached the final of the European Masters and Round 3 of the English Open. He didn't exactly cruise through when beating James Cahill 6-4 in Preston, but did enough to secure only his third proper appearance in this competition.

Predictably, 'The Rocket' starts as the tournament favourite despite only reaching the Last 32 in 2013 and the Quarter-Finals the following year. Although he is a frequent non-entry for overseas events, O'Sullivan's last trophy in China was at the 2009 Shanghai Masters - perhaps exemplifying his distaste for travel.

Ronnie has a tough looking section of the draw. Should he get past a resurgent Xiao Guodong (who beat Neil Robertson in Manchester) he will face either Kurt Maflin or recently crowned Haining Open champion Matt Selt.

Also in this third quarter of the draw sheet is Stuart Bingham, Michael Holt, Ali Carter and Stephen Maguire...all of whom have had encouraging results over the last few months.

Elsewhere in the bottom half (the fourth quarter) you'll find Selby, Robertson, Joe Perry and Liang Wenbo, who is fresh from claiming his maiden major at the English Open.

Despite losing to Liang in that final and having his 14 match winning streak on tour ended, no one is in form more than Judd Trump.

'The Juddernaught' sensationally missed out featuring here last year having been whitewashed 6-0 by Michael Wild in qualy. He may be worried by a few potential banana skins here too. Trump will play the winner of a wildcard match between Ian Burns and home teenage sensation Yuan Sijun; the youngster who trounced Martin Gould 5-0 twice in the space of six months at the China Open in March and the Shanghai Masters in September.

After that, in the Last 32, he could then meet another young Chinese prospect in Zhao Xintong, who created ripples in the snooker community when taking O'Sullivan to a decider at Event City last week.

More established stars such as Mark Williams, Shaun Murphy and Marco Fu sit in this part of the draw too, but they will all have their work cut out against some dangerous opposition.

The top segment of the sheet is headlined by current champ Higgins and national hero Ding who could meet in the Last 8 if everything goes their way. One match that excites me is the clash between Indian Open victor Anthony McGill and rising star Zhou Yuelong; yet another hot property from the Chinese production line of talent. Ricky Walden, Martin Gould and Graeme Dott are also placed here.

With matches up to and including the Quarter-Finals being the best of 11 frames, the World's best should be slightly more protected in Daqing than there were with shorter races in Bucharest and Manchester recently. We're now really into the thick of the season; immediately following this is the inaugural China Championship invitational that carries a mega £200,000 first prize.

Of the seven ranking events this campaign so far, we have had seven different winners, once again perhaps showing the strength and depth of the tour. Could that streak be extended?

Written and published by Michael Day on the 22nd October 2016 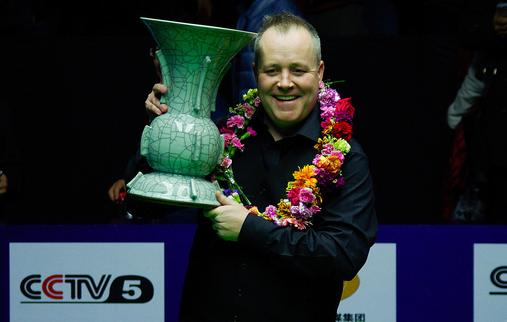