ARTICLE WRITTEN AND SUPPLIED BY THE IPA TEAM

​​The cream of the IPA (International Professional Pool Players Association) headed to the beautiful territory of Gibraltar, on the southernmost tip of Spain, for the finals for the inaugural Simonis World Series, and what a fantastic three days of action we had.

With all the events being played on the Simonis 861 blue cloth, we had the finals of the Professional event, the Team Challenge, which saw the might of the IPA up against a select Team from Gibraltar, and finally the Gibraltar Open, sponsored by Premiercuesports.

The Professional line up featured some of the World’s best players – we had Irish legend Ronan McCarthy against Wales’ Simon Ward, followed by Professional Number one Clint I’Anson taking on another Welsh hot shot and recent IPA World Championships runner up, Craig Marsh.

They would be joined by Chris Bowron from England, who battled through the qualifying event at Reading Pool & Snooker Club, and who would take his place in the Team event and the Gibraltar Open.

As we suspected, the watching spectators and the thousands enjoying the live stream were in for a real treat, whilst IPA betting partners Coral were providing opportunities for everyone who is interested in pool, to have a flutter on the outcomes – a big thank you to them for their support as always.

In the Professional event, both Ward and I’Anson came through their respective semi finals to set up the Sunday night showdown, and what a potting feast it was. First Ward showed his clinical potting skills to take the first set, but back came I’Anson, equally impressive, to level things and take us into a deciding set. It was Ward who was relentless in his pursuit of the title and he finally managed to shake off his stubborn opponent in what was a scintillating final, showcasing the very best of what blackball has to offer, taking home the £2,000 first prize and the title of Simonis Professional Champion and appeasing his many fans.

The Simonis Team Challenge is a new concept, with the five IPA players taking on the best that Gibraltar has to offer in a race to eight for the title. If the IPA were expecting an easy ride to the trophy, then they quickly had to rethink that idea, as Gibraltar took an early 3-2 lead after the first set of five matches. Back came the stars of the IPA to win the second set 4-1, and take a 6-4 lead overall but it wasn’t over just yet.  The final set of matches left all to play for, but the IPA managed to prevail over their gutsy opponents, coming out 8-5 winners in the end.

The match was played in a great spirit between the two Teams with quality on show from both sides, and with a special mention to Jotham Oliviero who pulled out a superb finish against I’Anson drawing gasps of appreciation from the crowd.

Finally, the Gibraltar Open, which carried a £1,000 first prize, saw another mouth watering final between Ward and his compatriot Craig Marsh. The first seven frames saw pool from a different planet, as both players showed off their creative potting skills to pull off some memorable finishes. Typically between these two great cue sport exponents, the final went all the way to the final frame, with Marsh sinking the final black to take the title and become the Gibraltar Open Champion for 2016.

So as we bid farewell to Gibraltar, we look forward to the next leg of the Simonis World Series, which will take place in South Africa in early September. We had a fabulous time in Gib, and our thanks go out to Paul Heard and his team for putting on such a great event and making us all feel so welcome. It really was a truly fabulous experience, one that will stay in everyone’s minds for a very long time, though plans are already underway for an even bigger event in 2017 – we can’t wait!

​Many thanks to the IPA for providing us with this article! To keep up to date with all the latest IPA news please visit their website here, or Facebook page here. 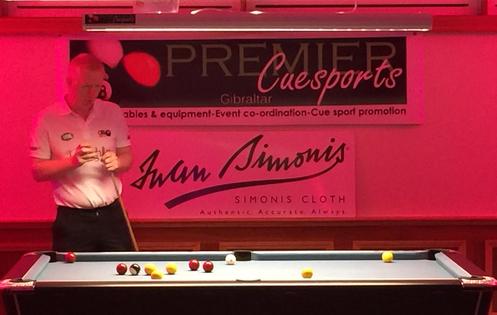