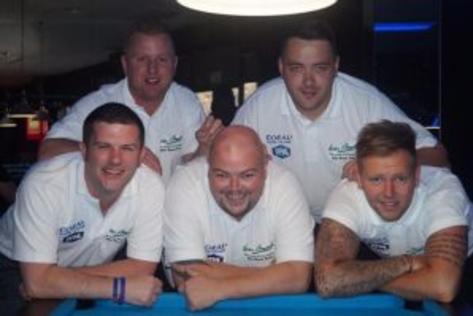 And so the IPA created yet another first, this time with the Simonis World Series heading to the sunny climes of Johannesburg, South Africa, where we would see the final four players do battle for the Professional title, as well as two Team Challenges, where the might of the IPA would take on the cream from the South African Blackball Premier League first and then a sponsor’s select squad, and last but not least, the Open event. 65 of the finest players in South Africa plus the 5 IPA players would lock horns for the title at the superb Time Out Sports Bar, which was furnished with 20 plus gleaming United pool tables covered with the equally perfect Simonis 681 blue cloth.

First up we had the professional event and the opening semi-final was a real mouth-watering affair, with current Professional Number One Marc Farnsworth, taking on the 2015 IPA World Champion Jack Whelan. Superb play was mixed with some unexpected mistakes as both players struggled with the unfamiliar conditions before Farnsworth prevailed to reach yet another final where he would take on the winner of Harry Irwin versus Craig Marsh. Both those players adapted far quicker to the table and produced a very high quality match, but it was Marsh who came through to challenge Farnsworth, though Irwin played his part in a thoroughly entertaining match, viewed on the live stream by thousands of fans.

The final was a nip and tuck affair but it was Marsh who emerged as Champion with a sublime display, taking the title by 8 frames to 5, wowing the local audience with some exquisite positional play which had them applauding several times in admiration.

The next day we had not one but two team events, where the IPA would take on the players from the Premier League (BPL) and afterwards against the Sponsors select team – Timeout.

The IPA started off well in the first set, taking an early 3-2 advantage, but it all turned around in the next set as the BPL made a clean sweep 5-0 to take a 7-3 lead heading into the third and final set. Their lead was never relinquished and buoyed on by the home crown, they went on to take the win with a convincing and deserved 13-9 victory.

Against the rising talent from Timeout, the IPA, still reeling from their earlier defeat, finally got their act together and came through as comfortable 13-6 winners, though from the evidence we saw there is a serious depth of talent in this pool crazy Nation.

The final day of action saw the Open event with a very strong field of 70 players looking to take home the first prize of 10,000 Rand. The IPA players were up against it from the start with Irwin being taken out in the first round, soon to be followed by Farnsworth, and then surprisingly Marsh, who exited at the quarter final stage.

Bowron struggled early on and soon went 4-0 down and from this point the title was in Whelan’s hands, which he duly took – but not before Bowron threatened a comeback. The crowd were thoroughly entertained throughout and both players received a huge and deserved round of applause in appreciation despite the disappointment of no South African representation in the final

So well done to all the victors from the three days of action, but the real winner once again was the sport of pool andblackball. A great time was had by all and we look forward to going back in the years to come, and we would like to thank everyone involved who not only made this a huge success but could not have been any more hospitable here in the rainbow nation.

The next stop on the Simonis World Series is Malta for what will be another three days of superb action (16th – 18th September) which will also be live streamed – all the details can be found on the IPA website www.ipapool.com or visit us on our Facebook page.

​​Many thanks to the IPA Press Team for providing us with this article! To keep up to date with all the latest IPA news please visit their website here, or Facebook page here.
​​