With the exception of the relatively low key qualification triple header at the Guild Hall in Preston a few weeks ago, the opening day of the venue stages in the 2016 Kaspersky Riga Masters signalled the return of big time snooker.

128 players initially entered the 200,000 Euros event with nearly all the first round matches played at Preston. However, two were heldover to Latvia.

Local ladies player Tatiana Vasiljeva (WLBS World Number 5) was given a wildcard into the tournament. She would eventually bow out to recent Crucible semi-finalist Marco Fu, but not before putting up a very spirited display that included her chalking up the second frame. Vasiljeva also took the World Number 12 very close in the fourth and fifth frames too.

Darren Morgan, the former World Number 8, won the EBSA European Open a few weeks ago -  an amateur competition in Lithuania. Courtesy of that title he also won a place here.

The Welshman's return to the professional stage was a successful one, as he came back from 3-1 down to beat fellow ex-pro Bradley Jones 4-3. (It would get better as well, read on...)

Unfortunately four of the Last 64 main draw withdrew - Hossein Vafaei Ayouri, Chen Zhe, Zhang Anda and Kyren Wilson missing out. Wilson's absence was because of a health problem and being unable to fly.

Much like the Guild Hall hat-trick earlier this month, Wednesday was a positive day for most of the Top 16 contingent involved; although the World Champion was one of three players in this band to come a cropper.

Mark Selby's first appearance in front of the TV cameras since winning his second World Championship ended in defeat, as he lost 4-1 to a super inspired Michael Holt.

Another big upset during the day was John Astley's 4-1 win over World Number 11 Joe Perry. Astley notched up the opener and then registered runs of 61 and 110 to move just one away. Perry at least averted the clean sweep with a 73 in Frame 4, but it was over in the next courtesy of John's 62.

Far less of a shock was Fu's elimination to Graeme Dott; the pair involved in a real high quality affair.

​​​Robertson appears to be fully over his Crucible disappointment after he dismissed re-returning professional Michael Georgiou 4-1 in the morning session. The Australian made breaks of 60, 96 and 61 on route. After missing out on nearly all of the European Tour last season, it was Robbo's first victory on continental European soil since winning the Gdynia Open in March 2015.

Current World Number 2 Stuart Bingham also made a trio of half centuries as he recovered from being behind twice to get the better of Lee Walker 4-2.

John Higgins is still unbeaten in what is his 25th consecutive season on the top tier. The Scot lost the second frame on the black, but efforts of 84 and 91 helped him to a 4-1 defeat of Mark King.

Mark Williams is 4 out of 4 for the campaign after a 4-1 success over the man who succeeded him as World Seniors Champion; Mark Davis. Williams fashioned contributions of 67 and 74, whilst Davis had a 125.

Judd Trump was last up on the main stage at the Arena Riga, and 'The Juddernaught' was in a powerful scoring mode as he saw off Chris Wakelin 4-1.​ Trump plundered in 70, 57, 92 and 59 to set up a very tasty tie against Chinese youngster Zhou Yuelong, who himself made a 132 (highest of the day) when beating rookie Christopher Keogan by the same scoreline.

Martin Gould was the other top 16 star through after he comfortably eliminated last year's runner-up, Tom Ford, 4-0.

​Another claim for performance of the day was surely from Sean 'The Storm' O'Sullivan, who restricted Luca Brecel (an opponent 60 places higher in the rankings at the end of last season) to just a total of 30 points throughout. O'Sullivan (no relation) rattled in breaks of 77, 105 and 100 consecutively during the 4-0 rout.

Jak Jones and Andy Hicks both claimed the unique honour of an ultimate comeback, as they recovered from the brink to deny Jamie Cope and Fang Xiongman respectively. ​On the edge of early exits at 3-0 down, they turned the tables for dramatic 4-3 switches.

​​​World Number 22 David Gilbert will fancy his chances of a very good run here given he is the highest ranked player in the top quarter of the draw. He advanced into the Last 32 with a 4-1 victory over Sam Baird.​

​Jamie Jones, Ken Doherty, rookie Zhao Xintong (who made four breaks of 59 or more), Stuart Carrington, Martin O'Donnell and Fergal O'Brien all came through deciders. O'Brien's victory on the final colours being the conclusion to an extraordinary affair with opponent Adam Duffy - together they made 9 half centuries, a remarkable figure in a best of 7 clash!

Morgan too will be joining them all; the 50 year old continuing his fantastic run when beating Polish amateur Adam Stefanow 4-2.

​It is the first time he has reached the Last 32 of a World Ranking event since the 2005 Grand Prix.

​For the full results, please visit the tournament page at snooker.org here.

​Picture above is courtesy of Jake Frank

Written and published by Michael Day on the 22nd June 2016 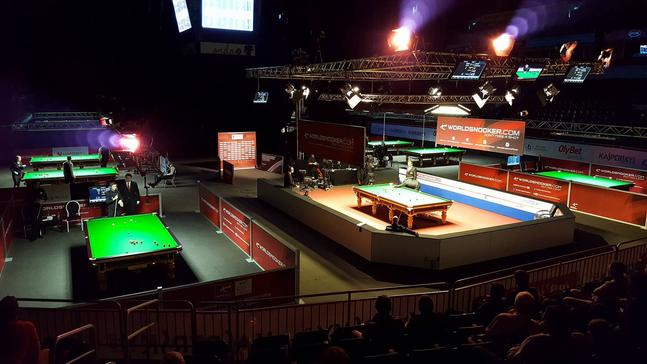