ROBERTSON OPENS UP AFFAIRS IN RIGA

​​Neil Robertson claimed the first trophy of the new snooker season with victory at the 2016 Kaspersky Riga Masters last night; it is his 12th major ranking title.

Robertson was rampant throughout the three day tournament in the Latvian capital city, dropping just a total of six frames in as many matches. In fact, the slightly extended final was the only time an opponent took more than one frame off him.

After electing to enter just one European Tour event last season, wins here were his first on continental soil since taking the Gdynia Open title in Poland during March 2015.

The Australian initially qualified for the venue stages with a 4-2 win over Michael Collumb in Preston a few weeks ago. At the 'Arena Riga', Robertson eliminated Michael Georgiou, Stuart Carrington and Matthew Stevens all 4-1 to book his place for 'Finals Day Friday'.

A mouthwatering clash with Judd Trump in the Quarter-Finals promised a close encounter, but the senior of the exciting duo chalked up braces of frames either side Trump's sole success in Frame 4 to run out a fairly comfortable victor once more.

Despite the overall outcome, in many ways the story of the competition was Robertson's semi-final victim Darren Morgan, who was enjoying a remarkable return to big time snooker.

Now competing as an amateur, the former professional World Number 8 was awarded a wildcard for this event courtesy of winning the EBSA European Open - an event in Lithuania earlier this month.

​The 50 year old Welshman made the most of his time back in the limelight. After seeing off fellow second tier opposition on Wednesday, Morgan upset Zhao Xintong, Ken Doherty and Xiao Guodong to feature in the Last 4 of a ranking event for the first time since the 1999 Thailand Masters.

But Morgan's run came to an end when he was restricted to just a total of 34 points throughout his 5-0 loss to Robertson on the main TV table.

Neil's opponent for the final would be Michael Holt; appearing in a major final for the first time in his 20 year career.

The Englishman was the 'Master of Brinkmanship' for the event after coming through deciding frame finishes against Scott Donaldson (Guild Hall qualifying), Ian Burns (Last 32), Stuart Bingham (Last 16) and Mark Williams (Semi-Finals).

The final fixture gave Robertson an opportunity to extract a measure of revenge for his surprise defeat to Holt in the First Round at the same World Championship in April.

​The early stages of this best of nine clash (no mid-session interval, just like the semi's too) were largely scrappy and frustrating, but after losing the opener, Holt took a 2-1 advantage.

It was a similar story in the fourth with the black originally tied up, although Robertson took it to square it up for 2-2.

The tie then seemed to open up and flow slightly, as did the 34 year old eventual winner. An effort of 79 put Neil back in front at 3-2, he then moved to within one of the winning line by clinching the sixth before registering a 69 in Frame 7 to help him complete the 5-2 victory.

As well as the 50,000 Euros winners kitty, Robertson continues his recent trend of starting off new snooker seasons with silverware. Both in 2013 and 2014 he took titles at his first avenue with the now currently defunct Wuxi Classic.

Other players to make an impression this week included Guodong and John Astley, who both made it through to Friday.

It doesn't seem too long ago that Guodong was the Chinese Number 2 and knocking on the door for a place in the World's Top 16. But a barren couple of campaigns in the ranking events has seen the former Shanghai Masters finalist slip to 51st in the pecking order. Perhaps being involved in the business end again here might fire up his ambitions once more.

Returning professional Astley has made a great start to his second spell on the full time tour. His route to the final 8 was highlighted with a Last 64 win over Joe Perry. The £4,500 he banks is also his biggest payday as a pro so far.

With the European Tour now officially ceasing to exist, the Riga Masters was upgraded to a 'major ranking event' and had a boost in its total prize money - 200,000 Euros.

Despite being repackaged and formatted differently, it was still difficult to distinguish this from the previous stagings they've had.

Finals Day certainly worked better though - things were a lot less rushed and confusing. It was also very nice to have a second feature table available to live stream.

The World Snooker circuit now takes a week and a half off before the return of the Indian Open from Hyderabad. 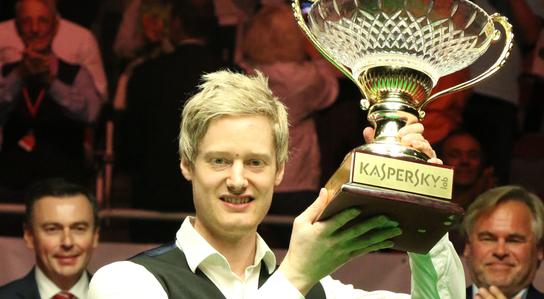