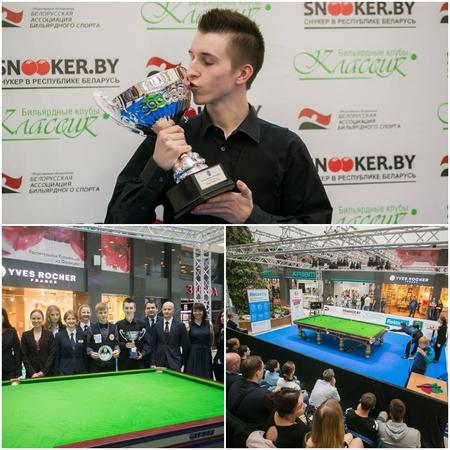 The sixth annual edition of this exciting amateur event featured 40 players from Ukraine, Lithuania, Latvia, Russia, Belgium, England and the host nation - more varied representation than ever before.

The opening day of the long weekend's action began with double elimination qualifying, as 32 of those hopefuls were whittled down to just 8. These qualifiers would join the remaining 8 'seeded' players in the Last 16 of the main draw on the Saturday. The semi-finalists of that knockout stage would then play at specially rigged table and arena at the Belarus Arena Shopping Mall on the Sunday - an idea new for this year in order to promote snooker amongst the public.

18 year-old Jacobs began the tournament as one of the favourites - and he didn't disappoint, as he came home a 3-1 winner over the Russian.

Jacobs, who was one of those 'seeded' players, is just the second foreign champion of this event after Poland's Grzegorz Biernadski in 2014. He has been a frequent competitor on the European Tour circuit in recent years; reaching the main draw stage of the 2014 Bulgarian Open before bowing out to Joe Swail 4-1. Jacobs also represents his country in international tournaments.

According to the head of the Belarusian Association of Billiard Sports, the first snooker table to be set up in the country was only in 2006.

The association must be congratulated for continuing to promote snooker with examples like this. It also shows how much appeal the sport has (and potentially has) in eastern Europe.

Pictures are courtesy of Snooker.by

Written and published by Michael Day on the 17th July 2016​