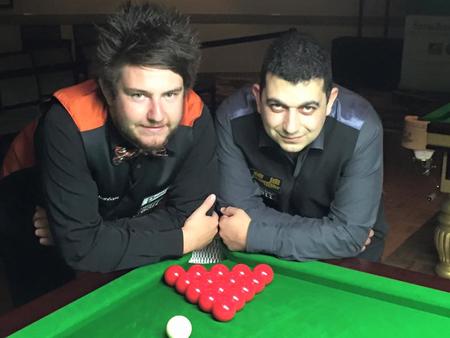 Australia's Kurt Dunham (top left) will have the opportunity to compete on the highest tier of the sport next season after capturing the 2016 Oceania Snooker Championship in New South Wales this weekend.

The latest edition of this continental championship featured 80 players representing New Zealand, Fiji and the host nation Australia. It is a competition that was previously won by Neil Robertson in 2000.

The field was initially divided into 20 groups of 4, with the top 3 from each making the knockouts.

​Dunham was comfortable in emerging from Group J - winning all three of his fixtures. He also negotiated his first KO games against Adam Bleumink 3-1 in the Last 60 and then Shannon Dixon 3-0.

His Last 16 clash would go to a deciding frame; ousting the experienced and successful Joe Minici 4-3.

​Australian Seniors champion Paul Thomerson was swept aside 4-0 in the quarters, whilst Adrian Ridley, a giant killing wildcard at the Australian Goldfields pro event last year, was seen off in another tight finish 5-4 in the semis. This was decided on the final black, after Dunham had crucially fluked the pink.

​Fellow Aussie James Mifsud (top right), who also topped his section with a 100% record, would be his opponent in the final.

Dunham took a commanding 4-0 advantage, but Mifsud not only fought back to level, he overtook his opponent with a 5-4 lead.

Credit to Kurt, though, as he made sure of another tight finish when claiming the tenth, and despite yet another huge slice of luck in the form of a fluked green in the decider, he managed to get over the line 6-5.

Not only was it his biggest achievement to date, but his first Australian ranking tournament win too.

He will now be the Oceania Billiards and Snooker Federation's (OBSF) nomination for a two year World Snooker professional tour card from the 2016/2017 campaign.

The Oceania 6 Reds Championship was a three day prefix to the main event. 51 players took part, once again from the trio of before mentioned countries.

Home youngster Ryan Thomerson walked off with the top honour after defeating countryman Daniell Haenga 6-4 in the final.

I believe he will get the chance to play in the World 6 Reds Championship later on in the year (usually in Thailand).

Many thanks the OBSF for permission to use the above photo.