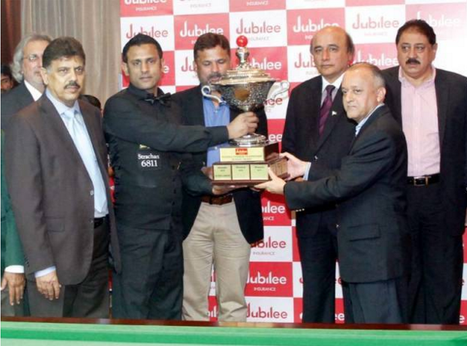 BILAL EMERGES AS THE CHAMPION

Mohammad Bilal was the surprise winner of the 41st Pakistan National Snooker Championship in Karachi this past weekend. The event had a number of shocks throughout.

The field was divided into round robin groups, with the top 2 of each making the Last 16 knockouts.

Shehzad had beaten experienced and big name players in Mohammad Sajjad (5-4) in the Last 8, and the number one seed Mohammad Asif (6-2) in the semis.

The final was an impressive display of snooker, with breaks from both.

Shehzad took the opener, and then extended his lead with a 69 in the second.

Bilal responded to square it, but further efforts of 54 and 81 restored Sohail's advantage.

The next brace of frames were traded, leaving Shehzad 5-3 up in the best of 13 clash.

But Bilal would go on a four frame winning spree to glory. He narrowed it to 5-4 before producing fantastic runs of 71, 64 and a 101 in the last to claim the crown in style.

It was noted as being one of, if not, the best and most exciting national championship to date. The overall tally of 16 century breaks throughout was also a record high.

Both finalists will now represent their country in the upcoming Asian Championships in Colombo, Sri Lanka. They can be inspired by last year's winner, Hamza Akbar, who went on to win the continental championship and is now part of the professional tour.

Picture courtesy of the Pakistan Billiards and Snooker Association (PBSA)

Written and published by Michael Day on the 29th February 2016