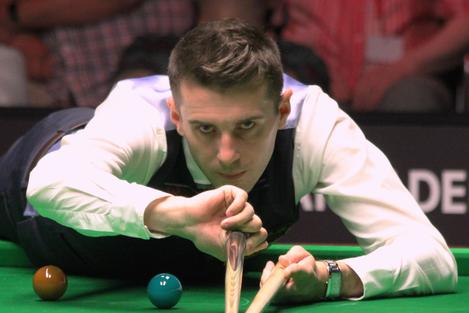 Many big names elected not to enter, but in my eyes, it was one of the most intriguing events of the last year - and it was all in honour of the 3 times Masters Champion.

Selby had a relatively quiet start to his second stint as World Champion. Opting out of the Indian Open, he previously bowed out in the Last 64 of the Riga Masters and Last 32 of the World Open. But his bid in Germany on Friday began with a bang as he swept aside amateur Oliver Brown 4-0 in the L128 – registering at least a half century break in every frame and restricting his opponent to just a total of 16 points throughout.

He then equalled that scoreline against Elliot Slessor in the next round before exhibiting 'Selbyesque' attributes in recovering from 2-0 down to oust another youngster in the form of James Cahill 4-3.

Through to yet another 'Finals Day' Sunday, 'The Jester' once again denied a very game Sam Baird 4-2 in the Last 16. Selby has previously had some terrific tussles with the Devonian; most memorable being their recent clash at the Crucible in April, which the eventual winner triumphed 13-11.

The 33 year old upped his scoring power with contributions of 66, 67 and 71 to eliminate Mark Davis 4-1, and then broke free from 2-2 to see off Dominic Dale 4-2 during the Semi-Finals.

It would set up an Leicester clash with Tom Ford. As well as knowing each other's games well because of their proximity, the pair met back in March's World Grand Prix First Round where Ford upset the favourite with a 4-2 victory. Perhaps Selby wanted revenge today too.

Selby started strongly with an 85 break in Frame 1, although Ford squared it in the next. The World Number 40 should have taken the lead in the third also, but a crucial miss on frame ball pink allowed his rival the opportunity to pounce and re-take a profit.

To Ford's credit, though, he showed character in responding with a 67 to level it again, although efforts of 72 and 58 in Frames 5 and 6 respectively took Selby to his eighth major ranking success.

I'm sure Ford's immediate feeling will be disappointment, but when he looks back on it, it was his second final appearance in the space of just over a year after being the runner-up at the 2015 Riga Open. It is quite a turnaround for the talented player who nearly fell outside the Top 64 not so long ago.

Jimmy White's recent re-emergance into the mainstream continued as he strung together four victories in reaching his 62nd Major Ranking event Quarter-Final – 34 years on since his first at the 1982 World Championship.

It is clear the desire still burns strong for 'The Whirlwind' - lifestyle changes over the summer already seem to paying dividends for the 54 year old who recorded just one professional win during the whole of 2015/2016. Who knows what could be next for 'Slim Jim'?

Un-Nooh could partially put to bed nightmares of his two black ball misses at the UK Championship and World Championship Qualifying by finally nailing the 147 maximum break when beating Kurt Maflin on Saturday evening at the Stadthalle.

With the 147 bonus rolling over since Ding Junhui's perfection at this year's Welsh Open in February, Un-Nooh banked £40,000 for that frame alone – well over twice what Selby received for winning the whole thing.

With Tony Drago current off the scene, the 'Turbo Thai' is undoubtedly the quickest cueist around; and one of the most exciting to watch. Ultimately it ended in a Last 4 defeat to Ford -the third time now he has lost at this stage of a Major Ranker, although I'm sure we will see him continue to rise up the ranking list.

As you are probably aware, the roots of this competition sprung from a Pro-Am, therefore it was fitting that both Gerard Greene (yes, he's technically an amateur now) and Zack Richardson made it all the way through to Sunday.

The introduction of a Ladies event to run parallel was a superb idea too – you can read here about how Ng On Yee claimed the title in that particular division.

I guess I'll end the review talking about the newly crowned champion. Winning in Furth is not unfamiliar territory for Selby, he previously conquered there in 2011 and 2012. However, he will be glad to put his first trophy of the season on the mantlepiece so soon, especially given it took him a few months to re-enter the winners circle after becoming World Champ for the first time in 2014.

We are getting into the thick of things now for the 2016/2017 campaign. Not long to wait until the next action – this Tuesday in Barnsley for the start of Shanghai Masters Qualifying!


Written and published by Michael Day on the 28th August 2016