Jamie Jones became the seventh different winner, in as many years, of the Pink Ribbon Pro-Am at the South West Snooker Academy this past weekend. Previous editions of this event have helped raise over £62,000 for Breast Cancer Charities. This year over £11,000 will go to 'Breast Cancer NOW' and £300 to local charity 'Charlie's'.

Over 320 entries were collected for this unique five day tournament. Wednesday to Friday were exclusively for the amateur hopefuls, whilst the weekend saw the introduction of the 16 professionals who appeared.

Amateurs could buy in twice into the draw - once in the top half, once in the bottom. Professionals gave away 18 points per frame to their lower tier opponents.

The strength and depth on show for the weekend's action was tremendous. Eight pros bowed out to amateurs during Saturday's Last 64 and 32 Rounds.

Sam Baird, Duane Jones and Gary Wilson were eliminated in the L32 by Kishan Hirani, Phil Parkin and Shane Castle.

Jones started his campaign with a 4-1 victory over promising youngster Haydon Pinhey before getting the better of local ex-pro Michael Wasley by the same scoreline.

Come the 'Finals Day', the Welshman was involved in a high quality epic with Clayton Humphries in the Last 16. Jones made breaks of 124, 53 and 80 to oust the amateur cueist 4-3; Humphries himself registered runs of 67, 80 and 74!

Rory McLeod was beaten 4-2 in the Quarters, and then a break of 138 - the highest of the entire event, aided him to a 4-0 clean sweep of fellow countryman Ryan Day in the Last 4.

Facing him in the final was David Grace, who ended the dream run of Shane Castle 4-1 in the semi's. David had earlier seen off Jamie Cope in the Last 8; the only pro he played on route to the final.

Streamed by Facebook Live (videos of the final are on the SWSA Facebook page here) the players traded frames throughout, but it was Jones who held his nerve in the decider for a 4-3 success.

Amateur Shane Castle is a precocious talent. The teenager, who actually took a short spell away from the sport fairly recently, upset Wilson, Mark Davis and Tom Ford.

Congratulations to Paul Mount and his dedicated team at the SWSA. It is a phenomenal achievement the amount of money that has been raised in fighting the disease; which is now over the £73,000 mark! 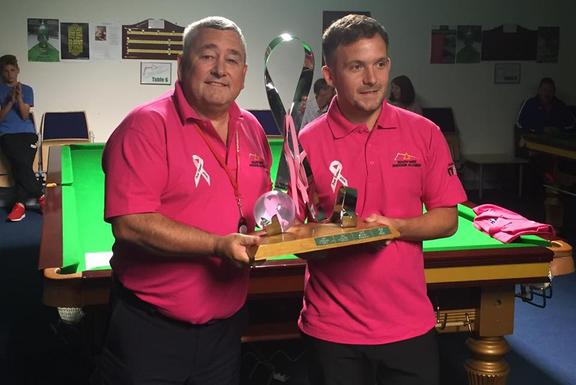