Going into the 'Final Qualification Round' on Sunday morning, each of the eight remaining survivors had already possessed professional status throughout their careers before.

​John Astley (pictured) originally made the pro ranks back in 2013 when he qualified courtesy of the European Tour amateur list. He subsequently got relegated after his two seasons, but now he is back in the mix after a resounding 4-0 victory over Peter Lines.

It capped a fantastic few days for Astley, who dropped just five frames in as many matches. He also had an extremely tough route through in seeing off David Lilley, Ng On Yee, Lyu Chenwei, Ian Preece and Lines.

Michael Georgiou was almost equally as impressive on his path; culminating in a 4-1 victory over Craig Steadman (It wouldn't mean doom and gloom for Steadman though, as you'll read later on).

​A Last 144 loss in the World Championship during April meant Georgiou finished 76th in the World Rankings - short of retaining his pro card. But the 28 year old can now look forward to a fourth season on the circuit starting next week.

David John became the second Welshman to successfully emerge from this year's edition of Q School when he beat Zak Surety 4-1.

Just like Georgiou, John lost only seven frames in six matches, he could also highlight latter round wins over Oliver Brown and Tony Drago too.

The last clash to be decided was the all continental European affair between the experienced Alex Borg (Malta) and youngster Alexander Ursenbacher (Switzerland); both cut from the ranks in 2015.

Perhaps he made that knowledge count, because it was 46 year old Borg who would secure a sixth separate stint as a professional after a 4-2 victory; recovering from losing the opening frame.

​After a second match exit in Event 1, Borg certainly had it very hard for his second, and last, bite of the cherry. Three of his five wins were in deciders, whilst the other two outcomes were 4-2.

​As well as the eight semi-final spots across the two events, there were an additional four cards on offer via an Order of Merit combined ranking list.

Players received a point for every single frame won during their time in Burton (byes / walkovers were also awarded with points). The top quartet of eligible players also bagged a pro tour card.

Three of these places were decided Saturday night with Jamie Barrett (England), Ian Preece (Wales) and Adam Duffy (England) all rewarded for consistent displays. Preece and Duffy will be returning to the top tier of the sport, whilst Barrett will be making his debut.

The fate of the fourth OOM card depended on the outcome of the Steadman v Georgiou match.

Steadman woke up Sunday morning knowing he was guaranteed an instant return to circuit, regardless. The 33 year old finished just shy of the top 64 cut off last month after his World Championship campaign.

Craig had an unassailable advantage at the top of the leaderboard, so his defeat to Georgiou effectively didn't hurt him.

His loss did however concern Adam Stefanow (Poland), who as it happens, would have claimed the last position after beating Andy Hicks on countback from his results in Event 1.

But due to it being very rare (if ever), not all 128 professionals enter every tournament. Therefore, entries are filled up from a Q School 'Top Up' list, so Stefanow, and probably Hicks, will most likely be able to enter everything this season, despite officially being amateurs.

​Georgiou, Steadman and Cao Yupeng from E1 are the only players from the most recent batch of demoted professionals to immediately bounce back.

Many thanks to snooker.org for their constant updates of the Order of Merit list!

Written and published by Michael Day on the 22nd May 2016 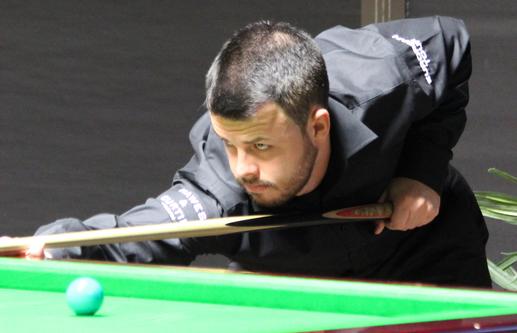