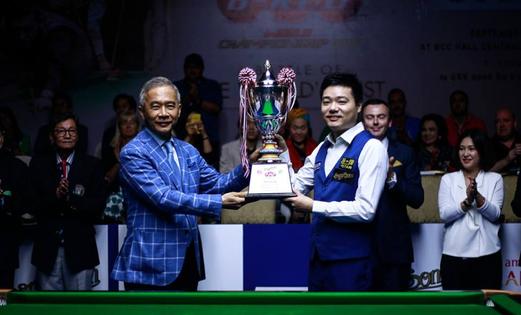 It may not have been the Crucible, but Ding Junhui has put a World Title on his CV during 2016 with a dramatic victory in the Final of this year's SangSom Six Red World Snooker Championship.

A field consisting of 48 players - amateur and professional, began this unique event which adopts a slightly altered and shortened version of the sport. Although previously known under a different guise, this was the 8th edition since 2008. Junhui, still China's Number 1, is the first player from his country to take the accolade.

In all honesty, though, Ding started his bid very ordinary indeed. However, due to the structure of the format, he was able to play himself into form.

​The 29 year old lost three of his five round robin matches; 5-4 to Pankaj Advani, 5-3 to Robert Milkins and a 5-0 whitewash by Dominic Dale. He only progressed to the Last 32 Knockouts after qualifying fourth from Group B on frame difference, courtesy of wins over amateurs Phaitoon Phonbun (Thailand - finished 5th in the group) and Ryan Thomerson (Australia).

The KO stages were a different story altogether. In the Last 32 he defeated the former two time winner of this title, Mark Davis, by 6 frames to 4. Ryan Day went down 6-3 in the L16, whilst fellow countryman (and runner-up here last year) Liang Wenbo was comfortably eliminated 7-2 in the Quarter-Finals.

​The 11 time major ranking event winner then extracted revenge on Advani with a 7-4 success in the Last 4.

His opponent in the final was Stuart Bingham - looking for his first silverware since the World Professional Championship in May 2015.

The Englishman was in terrific form by reaching the final unbeaten. Advancing with a 100% record from Group E, he survived his biggest test in squeezing past Mark Williams 6-5 in the L32. He then serenely dispatched Dale 6-1, Akani Songsermsawad (Thailand) 7-4 and Stephen Maguire (2014 Champion) 7-1.

Bingham's quest for a third different World Title (he was also the 1996 IBSF World Amateur Champion too) started well as he took the opener in the best of 15 frames clash.

However, this would be the only time he would lead on frames for the remainder of the match. Ding took 4 of the next 5, and later reached 'the hill' at 7-5.

With his back to the wall, though, Bingham chalked up the next two frames without reply to force a gripping deciding frame.​

A poor safety from the Asian allowed the current World Number 2 the first chance. Bingham crafted a cool break of 24, but he didn't get the desired cannon on the tied up penultimate red (sat behind the pink) and therefore had to play safe.

Bingham actually got a snooker, and when Ding failed to escape from it, he had a real clear cut opportunity to land the victory. But, after potting the first red with slightly too much pace, he left himself stretching on the pink and ended up playing across it.

​From the brink of defeat, Ding made sure that would be his rivals last shot. He cleared up from the last red with a counter-attacking break of 33, including a fine shot to dislodge the black from a side cushion, to bank the £45,000 winners kitty. It was a thrilling finale which saw the knowledgeable crowd really engaged with what was going on.

Another element to consider was the fact that the winner of this competition was awarded a place in November's lucrative Champion of Champions. Ding was already assured a spot in that line-up because of his second place at the World Championship a few months ago. People on social media have questioned his inclusion on that basis, but he has now 'legitimately' earned his place.

With just four more counting tournaments to go before the CofC, Bingham has still yet to find an avenue into it. Because Ding doubled up on qualification, Mark Davis - this year's World Seniors Champion, is now guaranteed a place.

The next action on the World Snooker calendar is the venue stages of the 2016 Shanghai Masters which start on Monday 19th September.

For further information, and the full results, on the 2016 SangSom Six Red World Championship, please visit the tournament page on snooker.org here. You can also read our updates via The Cue View Facebook page here.

Picture above is courtesy of World Snooker.

Written and published by Michael Day on the 11th September 2016​​​​