​Home hero Ding Junhui became the first ever two-time winner of the Shanghai Masters after a 10-6 victory over Mark Selby. Ding also gained some measure of revenge for his defeat to Selby in the World Championship final just over four months ago.

The World's Number 1, Selby, began well taking a 3-1 lead, but China's Number 1 struck back with five frames on the spin to lead 6-3 at the end of the first session.

On the resumption, Selby typically responded with three of his own (leaving the Chinaman pointless) to square it at 6-6. However, Ding resisted his opponent's recovery, chalking up the next four for a memorable win.

Ding secures back to back titles having also won the World Six Red Championship in Thailand only a fortnight ago. This, however, was his first major ranking trophy since the 2014 China Open, nearly two and a half years ago. The 29 year old's 12th major ranking trophy lands him £85,000.

It seems a long time ago now, but on Monday, the first day of this the 10th year of the event, the eventual champion was fortunate to avoid being victim to a huge upset. Qualifier Scott Donaldson missed a black off the spot in the deciding frame against Ding when just a few balls shy from knocking him out.

Asia's greatest ever player capitalised on his near miss though. Further wins over Mark Allen, Michael Holt and Stephen Maguire got him into his 16th major ranking final.

I felt as if Ding had a point to prove during his clash with Selby. Back at the Crucible in May, I don't believe he played anyway near his best, especially in the early stages, in what was the biggest match of his life.

It was perhaps understandable given the amount of snooker he had to play in order just to get to that championship match. Having fallen out of the World's Top 16 just before the cut off, he had to come through three rounds of qualifying to make a 2016 Crucible appearance. He then had to get past Gould, Trump, Williams and McManus - surely taking it out of him mentally - and as we know, the Crucible is a 'Marathon of the Mind'.

Threats of losing his place in the elite Top 16 again are now long in the past. Ding moves up to sixth in the rankings, and with little to defend after a poor 2014/2015 campaign, he has the chance to move further up in the near future.

World Champion Selby was aiming for successive major ranking wins for the first time in his career having claimed the Paul Hunter Classic in Germany last month. Whilst disappointed, he can console himself with the fact that he has extended his lead at the top of the World Rankings.

It's non stop action for the World Snooker Tour as tomorrow will see the start of qualifying for the inaugural European Masters.

Written and published by Michael Day on the 25th September 2016 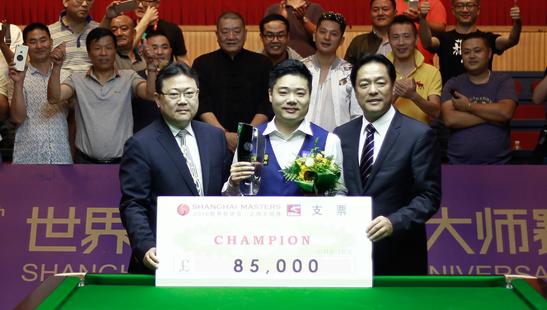