Big time TV snooker returned on Monday with the start of the 10th edition Shanghai Masters from the Grand Stage in the city. It would see two of the four Top 16 players in action perish, and an extraordinary clean sweep for a local wildcard against a current World Ranking event champion.

The first casualty of the day was Marco Fu, who was victim of a terrific comeback from International Championship runner-up David Gilbert.

In a high quality affair, the Hong Kong cueist left his opponent pointless in claiming Frame 1 and then extended his advantage further with breaks of 119 and 79 to go 3-0 up.

Gilbert responded in kind with awesome returns of 117 and 115 either side of the mid-session interval, but Fu went one away from a Last 16 place when he bagged the sixth.

However, the World Number 22 nicked a scrappy Frame 7 on the colours, followed it up in the next to force a decider and was then aided with a run of 50 to oust it 5-4.

2008 winner Ricky Walden became the second former champion (after Dominic Dale had failed to qualify), to exit this year's competition when he was eliminated by Michael White in yet another exciting finish.

White has had a fairly barren 2016 so far, although a Last 16 result at the Paul Hunter Classic in August and a morale boosting 5-4 comeback win against Jimmy Robertson in Barnsley qualifying for this meant he travelled to China in good spirits.

​The first two frames were squared (Walden 63 break in F2), but White went 3-1 in front which included a 113 in the fourth. Walden fought back to levels after the interval with runs of 53 and 62. The Welshman re-took the lead after a 101 in F7, but was once again caught up after Walden's 98.

Despite the previous breaks rattled in, it was still no surprise the decider was slightly sketchy. However, it was the younger of the two who managed to pull through securing only his second victory against Walden in seven meetings. Walden had lost the match even though he posted four breaks over fifty.

During the evening session, former winners here John Higgins and Ding Junhui both trailed 3-1 at their mid-session intervals before turning it around.

Recent World Six Reds Champion Ding very nearly suffered another early exit in one of his home events when denying a brave Scott Donaldson 5-4 on the final blue.

Scotland's Donaldson, the current World Number 114, had already won four matches during qualifying just to be here. The outsider led 4-3 and had chances in the last two to cause a massive upset. However, he will rue a missed black off the spot when in front with just two reds left in the decider.

There are eight wildcards in this year's event. In possibly the most remarkable result of this round's history, 16 year old Yuan Sijun whitewashed German Masters winner Martin Gould 5-0 with breaks of 111 and 65 in the first two frames.

This outcome is even more remarkable considering Yuan beat Gould by the same scoreline during the China Open earlier this year too. The teenager will next face the reigning World Champion and World Number 1 Mark Selby.

​Indian Open champion Anthony McGill was making his debut here having negotiated Paul Davison 5-0 during his qualifying round match in Barnsley earlier this month.

The Scot once again didn't drop a frame in seeing off the home nation's Chen Zifan; he also compiled a break of 133 in Frame 5, the current front runner for a £2,000 bonus.​

Michael Holt possibly had the toughest assignment on paper in being paired with recently crowned World Under 21's champion Xu Si. The Englishman dropped the opener, but efforts of 63 and 107 helped him to a 5-1 success.

The prize money Holt earns this week could be pivotal in qualifying for the newly announced £650,000 China Championship invitational scheduled for November. Currently third out of the four 'One-Year List' qualifiers, Holt will tomorrow face defending champion Kyren Wilson - the player positioned fourth.

Liang Wenbo was made to work hard, but China's Number 2 set up a meeting with Ronnie O'Sullivan in what will a repeat of the 2008 final here. Liang overcame fellow countryman Hu Hao 5-3 with efforts of 80 and 76 after being 2-1 down.

Written and published by Michael Day on the 19th September 2016 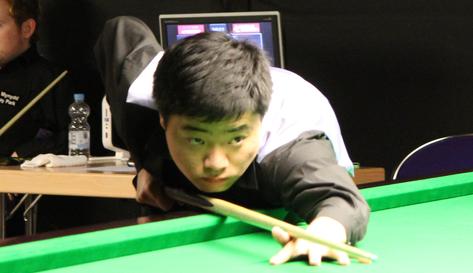