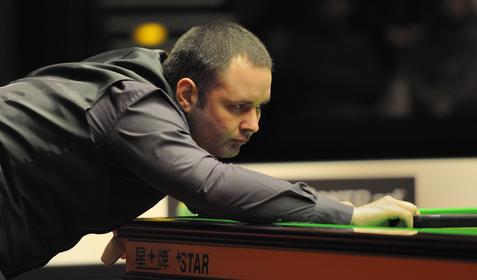 Kyren Wilson's defence of the Shanghai Masters ended at the first hurdle when he went down 5-2 to Michael Holt.

Experiencing the situation of being the top seed for the first time in his short career, Wilson fell behind early on. He did make a 101 in Frame 6, although a comeback bid was quickly quashed as Holt had a 101 of his own in the next frame for the win.

Mark Allen had it surprisingly easy with a 5-0 clean sweep over recent Indian Open Champion Anthony McGill in the other Last 32 match on show in the afternoon session in China.

The evening session on the TV tables saw two of the sport's heavyweight stars take on players from the home country.

Ronnie O'Sullivan produced a terrific recovery on his competitive return to deny Liang Wenbo in what was a re-run of the 2008 final here.

'The Rocket' was playing his first professional match since April, but look destined to be disappointed when he trailed 4-1 in what was, up until that point, a fairly scrappy and disjointed affair.

However, although clearly not on his 'A' game, O'Sullivan levelled it up at 4-4.

The early stages of the decider were dramatic as both players attempted to gain the upper hand. After an unexpected miss on the blue ball from the Englishman, Wenbo had a chance. But, after a poor positional shot, a questionable tough black along the top cushion was missed, leaving O'Sullivan the opportunity needed to book his spot during Thursday's Last 16. It will be his first appearance at that stage here since 2011.

On Monday, Yuan shocked Martin Gould 5-0 – the second time he had whitewashed the German Masters Champion in the last six months. Despite once again showing his undoubted potential with a 100 break in Frame 4, Selby controlled the tie, aided with runs of 76 and 52.

The Wildcard Round
Stephen Maguire constructed his third career 147 maximum break, and the third in Shanghai Masters history, during his 5-0 crushing of wildcard Yi Chen Xu.

The Scot put himself in line for a £5,000 bonus (providing it's not equaled this week) after completing perfection in Frame 3. Maguire truly did live up to his nickname as he was 'On Fire' with other efforts of 130, 50 and 104. A brutal display of break building.

The remaining professionals who had to endure a Wildcard Round match all emerged comfortably as well with dominating performances.

Wales' Ryan Day was in clinical scoring form as he crafted runs of 72, 107, 108 and 87 in beating Ma Bing 5-1. Amazingly bettering that, Stuart Carrington won by the same scoreline over Niu Zhuang with contributions of 141, 76, 135 and 76. In total, there were seven century breaks in just those 17 frames.

Written and published by Michael Day on the 20th September 2016