The Last 16 of the 2016 Shanghai Masters was played out in its entirety during Thursday's double session at the Grand Stage venue.

The top two ranked players in the World, and two qualifiers emerged from the first quartet of fixtures.

World Champion Mark Selby ended the hopes of Stuart Carrington, who was making his debut in the Last 16 of a major ranking event. The Leicester cueman fired in breaks of 87, 120 and 73 during a 5-3 win.

The 2011 winner typically has a consistent record in this event; of his nine previous appearances here, he has made at least the Quarters seven times.

2014 victor Stuart Bingham swelled his head to head record with David Gilbert to W7-L0 after a 5-2 victory.

Maguire, who complied a 147 during his Wildcard Round match on Tuesday, got the better of Barry Hawkins 5-3. One more win for the Scot will equal his personal best effort here having made the Semi-Finals in 2008.

Despite a relatively average display in his elimination of Neil Robertson yesterday, Day was back in strong scoring mode as he finished the impressive run of home player Mei Xi Wen, the current World Number 112. The Welshman rattled in runs of 87, 102, 107 and 82 during his 5-2 win - Mei took the opener and went in all square at their mid-session interval.

It was a real corker of an evening's session with a stellar cast that featured seven major event winners.

Having been let off the hook on Monday by qualifier Scott Donaldson, the host nation's only remaining hope, Ding Junhui, put in a strong performance to dismiss Mark Allen 5-2.

It was surprisingly the first meeting of the pair since the 2013 Ruhr Open Final. The Northern Irishman settled in first with a 69, but efforts of 56, 86 and 50 helped put the Chinaman 4-1 up. Allen poached the sixth with a counter attacking clearance of 64 after his opponent had made a 54, but a 58 in the next aided Asia's Number 1 through 5-2.

Ding has now made at the least the Quarters here for the last four editions.

Ali Carter will be hoping for history to repeat itself after he also won 5-2 against John Higgins.

​'The Captain' was always in control, efficiently crafting breaks of 72, 58, 64 and 67. Carter beat Higgins on his way to the World Open title at the end of July.

Recovery of the day goes to the resurgent Michael White, who chalked up five on the spin to upset two-time runner-up Judd Trump. This included a terrific 57 clearance to win Frame 7 by just one point.

However, someone who couldn't produce (another) comeback was the returning Ronnie O'Sullivan, who was beaten 5-2 by an in-form Michael Holt.

Pundits may talk about O'Sullivan being 'rusty' after a significant break since his last competitive action, but Holt proved that his victory over 'The Rocket' during March's World Grand Prix.​ The World Number 28 made a 103 to square it at 2-2, and also took the next three - finishing off with a 64 clearance to the pink.

Holt has carved out a reputation of knocking out big names over the last six months; besides beating Ronnie O'Sullivan twice he has also put Neil Robertson, Mark Selby, Stuart Bingham and Mark Williams to the sword too.

Could this be 'The Hitman's' week?

With the sudden successive eliminations of Judd Trump and Ronnie O'Sullivan, the Quarter-Finals are made up of four Top 16 players and four qualifiers. Only Selby and Bingham of the World's Top 8 are present, whilst Ding is the only non-qualifier in the top half.

Written and published by Michael Day on the 22nd September 2016 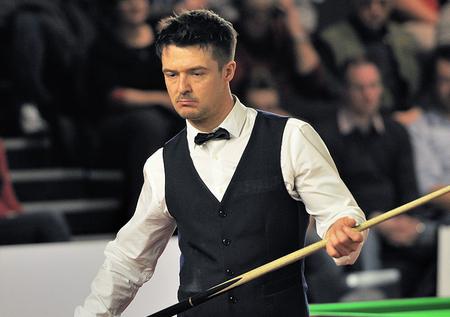