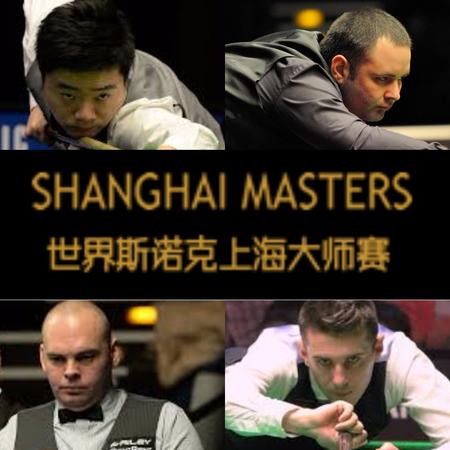 ​The weekend's Semi-Final line-up in Shanghai will consist of players who have all won at least one of the sport's 'Triple Crown' majors...

The top two ranked players in the World will square off during tomorrow's Last 4 after securing Quarter-Final wins in the first of today's two sessions at the Grand Stage.

​Stuart Bingham is making a very good defence of the prize money points he gained when winning this event two years ago. Despite possessing a poor personal head to head record with fellow Essex man Ali Carter, the 2015 World Champion bucked the trend with a comprehensive 5-1 victory.

In-form Carter has been a bit of thorn in Bingham's side recently after dethroning him at the Crucible in April and defeating him at the World Open in July (an event that Ali went on to claim). However, despite gifting Carter Frame 3 after going in-off on the final black, the current World Number 2 registered efforts of 58 and 91 in taking all the other frames on offer.

Bingham is looking to appear in successive finals having narrowly missed out in the decider of the SangSom World Six Red Championship in Thailand a couple of weeks ago. He has also yet to find an avenue into the lucrative Champion of Champions in November, with opportunities now running out.

Day crafted a 98 break in the third frame, although Selby chalked up the two frames before, and the two frames after to stand on the brink at 4-1 up.

The Welshman harboured hopes of a comeback when reducing his arrears to just 3-4, but the favourite got over the line in the eighth. Not particularly pretty, Selby registered just a half century (52) in the opener.

Saturday will see Bingham and Selby meet for the first time in competitive action of any sort since the 2013 Champion of Champions Semi-Final which the former won 6-4.

Selby is seeking back to back major ranking successes for the first time in his career having lifted the Paul Hunter Classic Trophy last month.

Holt was dogged, constructing contributions of 77, 50 and 64 in the frames he took, but ultimately couldn't quite follow up his elimination of Ronnie O'Sullivan yesterday.

Stephen Maguire, therefore, remains as the only qualifier left after he beat fellow non-seed Michael White 5-1.

The 35 year old Scot has been in stellar form throughout the event. Out of the five matches he has won so far in it, he has only dropped six frames, and he of course achieved perfection with a 147 maximum break during his Wildcard Round match on Tuesday.

It will be Maguire's second semi-final appearance in a major Chinese event within six months having reached the same stage of the China Open. His last major ranking title came over 3 and a half years ago at the 2013 Welsh Open.

Can he make a return to the Winner's Circle and become the tenth different champion of this tournament in as many editions? He is the only person left who can keep the streak going...

Written and published by Michael Day on the 23rd September 2016​​​