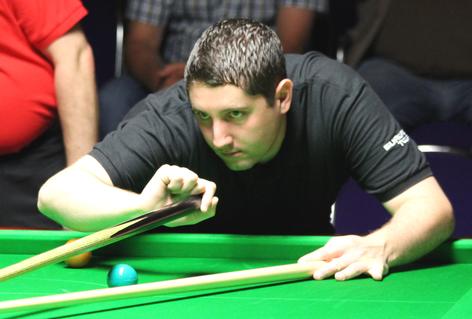 ​Thursday's 16 winners at the Metrodome are just one more hurdle away from qualifying for the venue stages of the 2016 Shanghai Masters later this month. Tomorrow they will face those players ranked 17th-32nd in the last round.

The quickest outcome of all was that between 2013 Runner-Up Xiao Guodong and Jimmy Robertson. Unfortunately for the Chinese cuiest he was mistaken in believing his start time was 14.30. Subsequently unable to get to the venue in time, Robertson was awarded a 5-0 result.

It is a shame for Xiao who has built up some momentum this new campaign after falling down the rankings in the last 12 months.

After a recovery on Wednesday which saw him come back from 4-1 down to Robin Hull, Zhang Anda (China) continued his good form in defeating Dechawat Poomjaeng (Thailand) 5-1. Zhang lost the opening frame, but then went on a scoring spree claiming the next four with runs of 69, 59, 127 and 88. He duly completed a 5-1 victory soon after.

That was Zhang's 8th match win this season already - and he didn't even travel to Latvia or Germany (Visa Issues perhaps?). If he beats fellow countryman Liang Wenbo tomorrow, it will be his first time qualifying for Shanghai as a professional.

Mark King came back from 3-1 down to eliminate Robbie Williams 5-3; despite not making a single half century throughout. Paul Davison hit a hat-trick of 50 pluses in seeing off Malaysia's Thor Chuan Leong by the same scoreline, as did Scott Donaldson over Daniel Wells.

The tie of the session was Jack Lisowski v Zhao Xintong.

Lisowski crafted a 130 in going 2-0 up, but Zhao levelled it with a 72. Jack went back in front with the fifth frame, but efforts of 58 and 93 helped put the Asian on the brink. He then looked set to progress courtesy of a 65 in the next, but a counter attacking 68 from his opponent forced a decider.

Kurt Maflin was in relentless break building fashion as he put on a terrific performance in blanking out Rod Lawler. The Norwegian conjured up runs of 52, 74, 50, 60 and 75 in his 5-0 success.

Somewhat surprisingly, Maflin has failed to qualify for the Shanghai Masters before in seven previous attempts. On Friday he will be hoping to put that record right.

Jamie Jones was another player not to drop a frame as he defeated Fergal O'Brien by the same scoreline - the Welshman rounding off the result with a 102 in Frame 5.

​Adam Duffy managed to turn around a 2-0 deficit and oust Mark Joyce in a close deciding frame finish.

Like Maflin, Preece and Duffy are just one more positive result away from featuring at a new venue to them.

Eclipsing Maflin's performance earlier in the day was Stuart Carrington (pictured above), who surely has been the star player in Barnsley this week so far.​

Today he ended Gareth Allen's hopes with a 5-2 victory, totting up breaks of 94, 82, 128, 55 and 50. This is near enough an identical feat to his Last 96 win over Michael Georgiou on Wednesday, where again he made four half centuries and a ton during the frames he took. An incredible achievement two days on the trot!

Mei Xi Wen, a CBSA (Chinese Billiards and Snooker Association) nomination for the circuit this season, secured a fifth professional win in the space of a week with a comfortable 5-1 victory against 2007 Shanghai Masters winner Dominic Dale.

At the Paul Hunter Classic in Germany Mei reached the Last 32, and he is now just one more lap away from a berth in his homeland. Perhaps he is making up for lost ground having not featured in the opening trio of 2016/2017 tournaments (Riga, Hyderabad, Yushan).

Miah seemed to be coasting through after taking a 4-0 lead, however, the Ruhr Open champion fought back after the mid-session interval to force an unlikely decider. To the 23 year old's credit, though, he collected himself back together just in the nick of time.

Matthew Stevens' mini-resurgence continues; Martin O'Donnell was the one to fall to him 5-3.

Friday's Last Qualifying Round Line Up