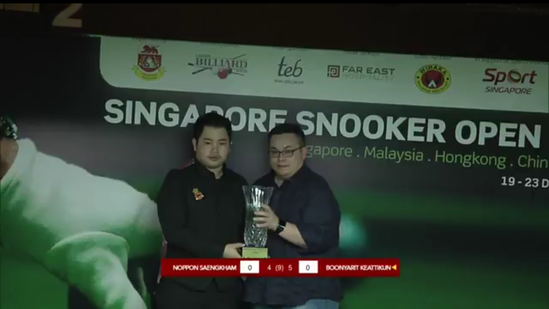 The event saw a number of amateur hopefuls mix it up with invited Asian top tier players who are currently having time off due to the Pro circuit's New Year break. At the start of the month there was local qualifying to determine who would join the four day main stages.

After being comfortable for the opening rounds, both Keattikun and Saengkham had to endure close finishes from the Quarter-Finals onwards.

The best of 9 Final began with a brace of very entertaining frames. Noppon made a break of 65 before watching his opponent countering on a run of 54. However, Boonyarit was unlucky when attempting to dislodge the pink, which eventually led to his downfall at the conclusion.

Saengkham doubled his lead in similar circumstances; although this time it was he who made an 80 clearance after his rival had earlier constructed a 56. 2-0 then became 3-0.

Needing to respond quickly, Keattikun not only got on the board with the frame before the mid session interval, but the Left-Handed 21 year old completely turned things around with four on the spin to go one away from victory.

He had a couple of opportunities in Frame 8, but an effort of 43 from Saengkham stopped his rot and forced a decider.

A bit of a scrappy start ensued for the ninth frame, but it was Keattikun who managed to construct a 70 break which ultimately sealed him the win.

Both Keattikun and Saengkham are previous World Under 21's Champions in 2015 and 2009 respectively.

Results - from the Quarter-Finals onwards - losers each received $350

For more information, and the full results, please visit the Cuesports Singapore website here or their Facebook page here.

Written and published by Michael Day on the 23rd December 2016​​​