After a short stint back in the UK, the snooker roadshow once again moves eastwards for the 2016 SangSom Six Red World Championship from Bangkok in Thailand.

Whilst it may not be top of everyone's priority list, Professional Six Red events have been held annually since 2008, (with the exception of 2011) and it does indeed offer the opportunity to put a World Title on the CV.

Logistically, many of the professionals in the field will also be involved in the Shanghai Masters starting on the 19th; I should imagine they will stay out in the Far East to acclimatise.

This is an invitational tournament and is therefore unranked (not going down the path of the Shootout yet!), although it does offer the winner a place in November's lucrative Champion of Champions if that quota is not sufficiently filled. With only four other COC qualifying avenues available bar this, there is a very strong chance of that happening considering quite a few names have already 'doubled up'.

The World Six Red Snooker Championship entry list is partly made up of amateur qualifiers / nominations from different regions of the World. One of the charms of this competition is the cosmopolitan feel to it; there are set to be 17 different nations represented. This shortened version of the sport enjoys much popularity in Thailand, many other parts of Asia, the Middle East and other places too.

The 48 competitors starting out on Monday are initially divided into 8 Round Robin Groups of 6. Playing each other over the best of 9 match-ups, the top 4 from each will advance to the Last 32 Knockout Phase where the length of the ties will increase.

Last year Thepchaiya Un-Nooh became the first home player to win the title after he beat fellow Asian Liang Wenbo 8-2 in the Final.

Previous winners in this form include Mark Selby (2010), Stephen Maguire (2014), but Mark Davis is the most successful player having bagged the trophy in 2012 and 2013. Ricky Walden (2008) and Jimmy White (2009) also won it whilst it was under a slightly different guise.

The event is loosely seeded so the amateurs are spread across the groups. Players to look out for from the second tier include recent Riga Mastgers Semi-Finalist Darren Morgan (Wales), current World Amateur Champion Pankaj Advani (India) and teenage prospects Yuan Sijun (China) and Ivan Kakovsky (Russia). There are many more though.

For a look at the Groups Draw, please visit the tournament page on snooker.org here.

Written and published by Michael Day on the 4th September 2016 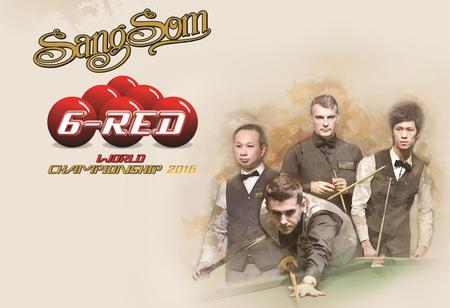