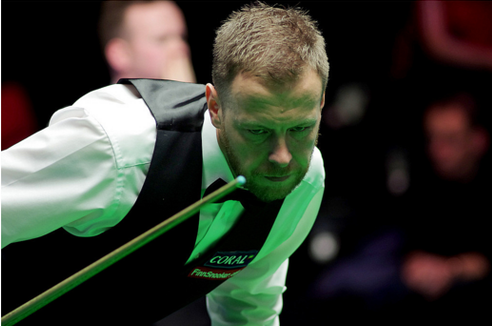 ROBIN REIGNS AT THE SHOOTOUT!

Robin Hull of Finland was the last man standing in the 2016 Coral Snooker Shootout on Sunday evening.

The sixth edition of this unique, modern day, jazzed up version of Pot Black began Friday night with 64 of the world's top players.

41 year old Hull probably wasn't one of the names talked about in terms of winning the event at the start, but his calm character, experience and ability meant he was more than a match for anyone over this one frame, timed format.

He began Saturday afternoon with a tight 41-35 victory over Craig Steadman and then put pre-tournament favourite Judd Trump to the sword a few hours later in a comfortable 70-6 success.

In the Last 16 on Sunday afternoon he eliminated the lowest ranked competitor left in Ian Burns to advance to finals night.

With prize money doubling up each round, the event was becoming more and more serious. Mark Williams, after beating Joe Perry in the early session, was the only current top 16 player left in, meaning the remainder of the field were battling it out for a very useful, and possibly career helping cheque in the bank.

First on in the schedule he ended Ryan Day's hopes before taking out another Welshman in Williams during the semi-finals. ​

Williams had his chance to counter attack after falling behind but missed the last red in the baulk area when on the cusp of taking the lead with not much time to go.

It would be an intriguing all European final affair with Belgium's Luca Brecel sharing the championship fixture.

20 year old Brecel would be playing in his second final in just eight days after losing to Martin Gould in the German Masters last Sunday in Berlin.

​All of 'The Belgian Bullet's' encounters were close as he saw off Mike Dunn, Xiao Guodong, Ben Woollaston, Rod Lawler and Joe Swail on route.

Hull got in first to establish a small lead, but went in off when potting a tricky red to offer up 'ball in hand' for his opponent, but Brecel was unable to fully capitalise.

More points were potted, and with just over two minutes left, Hull would surely claim the win with one more red. However, he missed it, giving Luca a fantastic chance to counter attack with not a ball safe on the table.

It looked for the world as if Brecel had done the hard work as he moved to within a couple of pots to Hull's score, but he rattled a red into the pink pocket to virtually hand the match over.

It continues the sequence of mid to lower ranking professionals who have lifted the trophy; no one from the top 16 at the time has won it yet.

Not only was it Hull's first professional title of any description, but the first for Finland too.

It is a well deserved reward for Hull, whose career was nearly completely ended less than a decade ago due to a viral infection which later caused an irregular heartbeat affecting his balance.

After leaving the tour, he returned a few years later after winning the European Amateur Championship.

He is without doubt currently underranked, although he has reached the Crucible in the last two stagings.

This success could also earn him a spot at the Champion of Champions later on in the year, but this is dependant on other competition winners in the coming months.

He is yet another new winner / finalist in this unpredictable 2015/2016 season.

The Snooker Shootout does get a mixed reception amongst the snooker fraternity, but I stand by my beliefs it should have a permanent spot of the calendar.

It is different: about as far away from the Crucible atmosphere as possible, but it is also good fun, and a great opportunity for lower ranked players to showcase their skills live on TV in a one table set-up - something they would rarely get.

The money Hull won in Reading can now support him on tour for the next couple of campaigns too.

The SSO is only for a long weekend, and stop clocks aren't going to be taking over mainstream snooker anytime soon.

There is no rest break for the snooker circuit as tomorrow morning will see the start of the Welsh Open in Cardiff!

Written and published by Michael Day on the 14th February 2016