HARRISON MAKES IT RIGHT AT TOUR 2

Former World Champion Phil Harrison battled his way through a bumper field to win the second UK Tour of 2016; recovering from his final defeat in the opening tour back in February.

For a while in the Easter weekend's main event, it looked like a repeat of that final from Blackpool, with Mick Hill carving his way through the other half of the draw.

However, the reigning WEPF World Champion, fresh from his run to the final of the Chinese 8 Ball World Final a week earlier, was somewhat surprisingly stopped in his tracks by Wales' Steve Martin 8-6 in the Semi-Finals.

Multi-time tour winner Harrison had looked comfortable throughout the tournament, his Last 32 deciding frame victory over former winner Ian Duffy 7-6 being his sternest test. In the Last 4 he dismissed 2013 & 2014 World Champion Tom Cousins 8-3.

Appearing at this stage for the first time, Martin, who expelled England Internationals Gavin Lomax and Giusseppe D'Imperio on route, broke and dished in the opening frame.

However, through a combination of unforced errors, dry breaks and brutal brilliance from his opponent, that would be his only frame in losing 8-1. A number of those Harrison winning frames being 8 ball clearances.

In the Challenge Event, Shaun Chipperfield held his nerve in a final frame thriller against Matt Brierley for the title, whilst in the Supreme Team Classic, the combination of Dave Rawlinson, Mostafa Boukri and Carl Hough were triumphant.

For more information, and the full results, please visit the UK Pool Tour website here. They also have a Facebook page here.

Written and published by Michael Day on the 10th April 2016 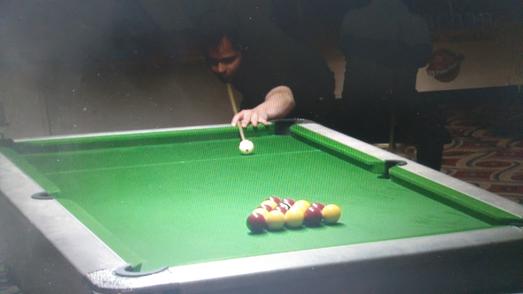