It was the sixth edition of this pro-am event that brings together talents from all across Europe and beyond. 80 players initially started out the 10,000Euros prize funded tournament.

The opening days action saw the field split into 16 groups of 8, with the top 3 in each progressing to the Last 48 knockouts (the top qualified players went straight into the L32).

​Despite some impressive performances and resistance from a number of the amateurs on show, the competition would become exclusively professional from the Quarter-Finals onwards.

Ebdon eased through his round robin without dropping a frame, although he had to hold his nerve in squeezing past Garry Balter 3-2 in the Last 32; the host nation star constructing a 93 clearance in forcing the decider.

​Afterwards, the 2002 World Champion eliminated Danny Connolly (England) 3-0 with the aid of a 101, and then former Q-School graduate Allan Taylor (England) 3-1.

Joining him in the final this time around was fellow Englishman Mark Davis.

The reigning World Seniors champion had a fairly straightforward route into the latter stages, but did have to survive deciding frame finishes against Gareth Allen (3-2) and Gary Wilson (4-3) in the quarter and semi-finals respectively.

Whilst duelling with Allen, Davis was pegged back twice in the match despite overall contributions of 43, 46, 90, 57 and 67.

He also eventually enjoyed a remarkable success against Wilson - in what was surely the match of the competition.

The final too would be a very high quality affair; Davis once again being subjected to a barrage of heavy scoring from his opponent - although this time he was unable to recover.​ Ebdon crafted breaks of 116*, 64, 88, 91 and 60 during a bruising 5-1 win.

​* at one point was on for the maximum before being forced to play for the green.

Elsewhere in the event, 4 Austrians made the Last 16, whilst there was a Last 32 run for former professional Dene O'Kane; New Zealand's greatest ever player.

For further information, and the full results, please visit the VSO website here!

​Many thanks to the organisers for permission to use the above photo. 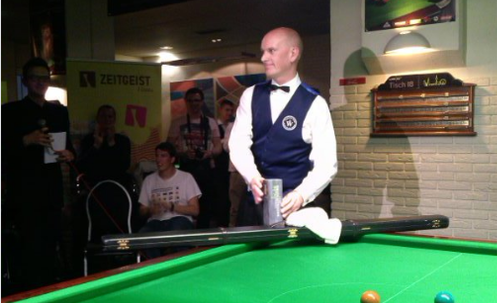