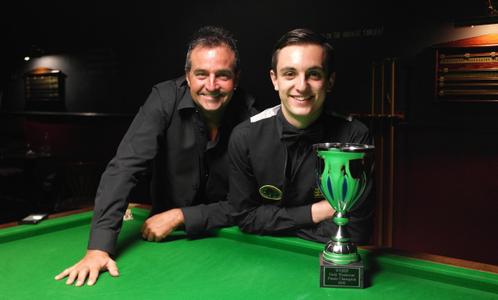 ​PINHEY MAKES IT A GOLDEN DOUBLE

​​The top sixteen ranked players from the West of England Billiards & Snooker Foundation’s (WEBSF) Gold Waistcoat Snooker Tour travelled from all corners of the region and some further afield to Torquay to compete in the inaugural WEBSF Gold Waistcoat Masters title and for a share of the £1320 prize fund.

With these top amateur players going head to head in a seeded knock-out tournament there was an air of expectation and the players did not disappoint.

Gold Waistcoat Tour Champion Haydon Pinhey from Plymouth was top seed and Tour runner-up Eddie Manning seeded second, how would they both fair playing the best of seven frame matches instead of best of three?

Both players started strongly; Pinhey beating Chris Coumbe (Plymouth) 4-1, Coumbe recently returned from Ireland where he competed in the European Open Billiards tournament; Manning beat the event sponsor Matt Hulatt by the same score-line and in doing so Manning posted breaks of 81,71 & 51.

Other matches from the first round included Coumbe's fellow exponent of the three ball game Steve Brookshaw who beat Darran Lock (Seaton, Cornwall) 4(61)-0.

Welsh International Callum Lloyd was favourite against Tom Kevern from Plymouth. However, Kevern is a very good match-player and he dug deep to win 4-3 against the higher seeded player.

Dan Legassick (Plymouth) and Andy Rogers (Wales) both struggled with the super-fast table conditions but it was Legassick that coped the better winning 4-2.

Father and son Wayne & Dale Branton from Plymouth have gone head to head 13 times in WESBF tournaments. Dale maintained his winning record with a 4-1 win.

Third seed Andy Symons (Tavistock) had a real battle against the fourteenth seed Mitchell Grinsted, another tough match-player from Plymouth. Grinsted came through with a 4(51)-3 win.

Top potter Harvey Chandler made the long journey down from Rushden but failed to find his potting form against Darren Horsman from Fremington, Horsman wining 4-2.

The main event saw the first century of the day a fine 106 made by Pinhey against Brookshaw in a 4(102,66)-2 win. Kevern once again played solid snooker to beat Legassick 4-1, whilst Dale Branton could not get going against Grinsted losing 4-0, Grinsted posting a 93 break.

In the last of the quarters Manning made short work in defeating Horsman 4(70)-0.

The semi’s saw the top two seeds still on course to meet in the final. Manning got there first with an emphatic 4-0 win over Grinsted, whilst Pinhey was taken all the way by Kevern before he won 4(64,56)-3 to join Manning in the final.

The final promised much and looked like being a one sided affair against the run of form when Pinhey took a decisive 3-0 lead posting breaks of 61 & 92. Manning rallied with a fine 86 and solid snooker to claw back to 3-2 leaving Pinhey looking ruffled. However, Pinhey pulled himself together to make a superb 105 clearance to win 4-2 and pull-off a magnificent brace of Gold victories.

The Plate event was won by third seed Andy Symons who beat Darran Lock 3-1 in the final. However, Symons was stretched by Wayne Branton 3-2 in the quarters and Lock by Callum Lloyd in the semi’s by the same score-line.

WEBSF spokesman said, “A fantastic achievement from Haydon Pinhey to add the Gold Waistcoat Masters title to the Overall Gold Waistcoat Tour title, to achieve both titles in the same season is something special. It was always on the cards that Eddie Manning would reach the final, his prolific break building skills witnessed throughout the season are the mark of a very good player and he is a joy to watch, providing you are not on the receiving end!”

Any player interested in entering WEBSF events should contact Steve Canniford, Mobile 07891940995 or visit http://www.websfsnooker.com or WEBSF Facebook. Thanks to The Galaxy Centre, Torquay for hosting the event and the main sponsor M.J.H. Paving Ltd. for providing the trophies and a significant contribution towards the prize money.

Well done to the WEBSF for another fantastic season! Keeping the amateur snooker scene vibrant.