20 years on from their only previous victory in the WEPF World 8 Ball Pool Team Championships, Australia fulfilled their potential after sending over arguably their strongest assembled squad since that 1996 win.

Captained by Marc Robertson (brother of snooker player Neil), the Green and Golds enjoyed a very solid Round Robin qualifying campaign; finishing third just behind England on frames aggregate. In the Play-Offs they then managed to oust Scotland 11-9.

This would set up a chance of revenge against England in the Semi-Finals. In what would be one of the most dramatic and exciting finishes seen for years, second session 'substitute' Adam Andreztke cleared up with two visits after Ben Flack had gone in-off when missing the Black in the decider. You can watch the whole match here - it was very entertaining to say the least.

Waiting for them in the Final was Ireland, who had been in relentless form throughout after coming top of the group with 13 straight wins over all the other entered nations. However, they did have to recover from a 4-1 deficit to India in the Last 4; notching up seven frames on the spin for a 8-4 success.

The 2006 and 2011 winners started the match as favourites, but it was the Aussies who took the opening point courtesy of an in-form James Delahunty; the leading player from the overall individual stats earlier in the week with a tremendous 31 out of 39 points record.

The Irish did however soon get a foothold in the match - Pat Moorhouse, Karl O'Donoghue and Shaun Sharkey each chalking up W's to go 3-1 in profit.

Needing to stop the mini rot, the boys from 'Down Under' went on a winning streak of their own. Robertson and current national champion Michael Scerri drew them level at 3-3 before Rusty Wheeler pushed them back in front with the seventh.

After the mid-session interval, the Australians decided to put Wheeler straight back on again - a tactic which would work, as the experienced cueist confirmed back to back personal points. The advantage was then stretched even more to 6-3 because of Player of the Tournament Delahunty's 'Break and Run' in Frame 9.

Now in real trouble, Declan Hough reduced the problems by one, but Jake McCartney placed Australia on the hill come the conclusion of Frame 11.

At the point of no return, Moorhouse and David McQuillan gave Ireland hope by climbing to within one of their rivals, although it would be Scerri who ultimately held his nerve during a World Championship winning clearance.

An 8-6 win for Australia, who actually secure the double this week after their Ladies Team also reached the summit with a comeback win over England in the female final. Cue the celebrations...

For more information, and the full results, please visit the WEPF website here. 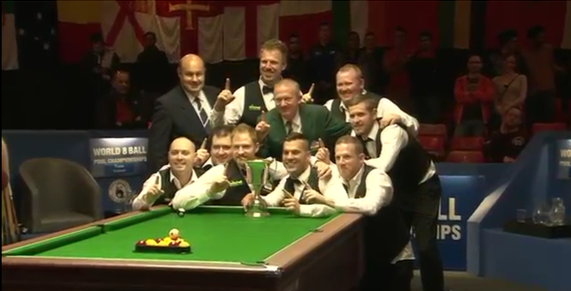