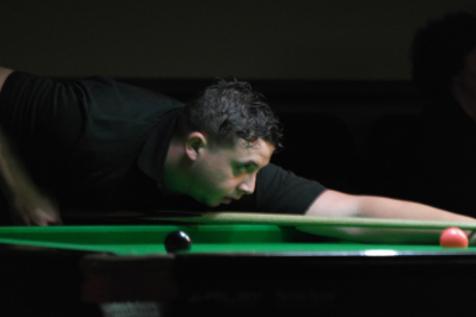 Both players played solid snooker throughout the day; Castle went through the card undefeated in all nine matches whilst Manning, after losing a close first match, reeled of eight wins to reach the final.

Manning posted the highest break of the day, a superb 125 clearance, ironically against Devonian Andy Neck who had posted a 124 clearance just a few minutes earlier.

After 336 frames of snooker the following players made it through to join the finalists in the qualifying stages: Steve Brookshaw, Dale Branton & Jay Bullen from Devon, Harvey Chandler (Northamptonshire), Ben Fortey (Hertfordshire) and Ryan Mears from Hampshire.

The Plate final was won by Mark Turner from Devon. A total of 369 frames where played on the day on tables that have served the snooker community for many years, Jesters Snooker Hall, Swindon. The tournament was promoted and run by the West of England Billiards and Snooker Foundation (WEBSF). Big shout for Plymouth International Referee Nick Harry, worked tirelessly all day.

WEBSF spokesman said, “What a great start to the WEBSF season….in addition to the regulars we have welcomed several new players, the winner Billy Castle being one of them. As is becoming the norm for our tournaments we have seen a good tally of high breaks across the board, such is the high standard the players are setting. After this showing all bodes well for the rest of the season. If you don’t wish to compete in the tournament but would like to spectate, the quality of break building on show is certainly worth watching. Alternatively if you want to volunteer your help, come along and meet the team.”

The next WEBSF event is the Bronze Waistcoat Open Snooker Championship for youth players and will be hosted by Jesters, Swindon on the 15th October 2016. In addition the WEBSF have plans for ten further events including Senior Snooker, Youth Snooker, Ladies Snooker and English Billiards. Go to www.websfsnooker.com for more information.

Any player interested in entering WEBSF events should contact Steve Canniford, Mobile 07891940995 or visit http://www.websfsnooker.com or WEBSF Facebook. Thanks to Brad and his staff at Jesters, Swindon for sponsoring this tournament.

This article was written by Steve Canniford. Congratulations to the WESBF team for embarking on yet another season of snooker/billiards events. They have been serving the amateur Cuesports community for well over a decade now despite facing a number of obstacles in their way. Keep up the GREAT work!