ON YEE PREPARES FOR HER TITLE DEFENCE

Last year, maiden champion Ng On Yee of Hong Kong created history by becoming the first ever winner from outside of the UK & Ireland in this 33 year old competition (although Australia's Lesley McIlrath won the 1980 World Women's Open, though).

She also managed to break the dominant 10 year winning streak of England's Reanne Evans with victory in the semi-finals; a real red letter day for women's snooker.

On Yee would go on to defeat Emma Bonney 6-2 in the final to lift the trophy and become a hero back in her home country. Plenty of awards and accolades have been forthcoming since then too.

The 25 year old has also been rewarded, likewise with Evans in 2015, a spot in the qualifying event of the Men's World Championship next week in Sheffield.

After her biggest win, the advanced accounting graduate has also claimed the IBSF World 6 Reds Championship (August in Pakistan) and the UK Championship last September - once again beating Evans, this time in the final.

However, a determined Evans has ruled the roost since then by chalking up a trio of consecutive wins at the Eden Masters, Connie Gough Memorial and Eden Classic. She will surely begin as favourite in her attempt for an 11th crown.

​​​The opening two days at the Northern Snooker Centre will consist of doubles action with the Mixed Pairs and the Ladies Pairs titles to be decided.

With the China Open currently going on in Beijing, the pool of players available may have been slightly reduced, although there are a number of formidable partnerships on show.

With last year's winning combination of Reanne Evans and Michael Holt not present this time around, the mix-up of On Yee and young home professional Oliver Lines look most likely.

However, there are plenty of other pairings who will be very dangerous and capable over this unique format.

The same scenario can be said in the Ladies Pairs - a tournament which kicks off the festival tomorrow (Thursday). Quite a few of the entries are overseas national pairings such as On Yee / Katrina Wan (Hong Kong),​ Jessica Woods / Kathy Howden (Australia), Diana Schuler / Diana Stateczny (Germany) and Chitra Magimairaj / Varsah Sanjeev (India).

There will also be individual events for the Seniors and Under 21's.

​England's reigning champion Jenny Poulter will be back to defend her crown in the Seniors, whilst ​Belarus' current IBSF World Under 18's Girls Champion, Yana Shut, will be attempting to go one better here than last year in the U21's.

The main event will run between the 2nd-5th April, and this year sees a change in format.

​The top 8 seeded players will automatically go into the Last 16 knockout round, with the remaining 'qualifying' spots up for grabs in a round robin groups format.

Apart from the names mentioned earlier, Catalano is a four time finalist of this event.

One of the most recognisable stars battling it out for the chance to meet those players in the KO's includes Jessica Woods of Australia, who was recently crowned Oceania Champion once again.

Here at 'The Cue View' we will keep you up to date with all the news and results! 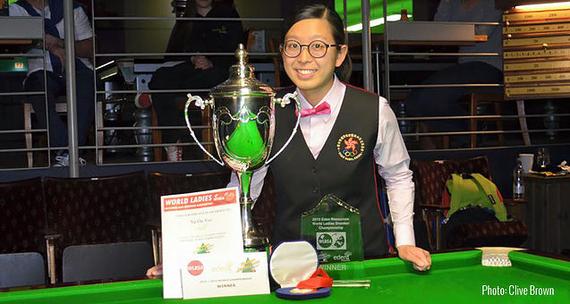