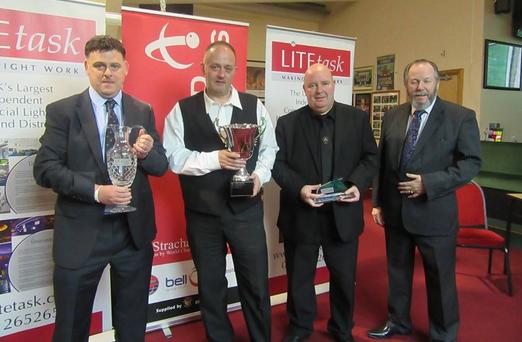 Former World Champions Peter Gilchrist and Mike Russell were the winners from a six day English Billiards extravaganza on the 'Emerald Isle'. It would be their first titles on the circuit this season.

The weekend's action consisted of the Irish Open (level 3 ranking event with £2,100 total prize money); which would witness one of the most exciting and dramatic ever finishes to a World Billiards event in the final.

Defending champion Gilchrist, who is a citizen of Singapore, beat rival David Causier 436-435 - passing his opponent at the last possible avenue after scoring points from an in-off white with just seconds to go!

It was a sweet success for Gilchrist; gaining some measure of revenge for final defeats to the World Number 1 in the World Championship (Long-Up) and British Open in recent times. It also meant denying 'Player of the Season' Causier a seventh trophy of the campaign.

Triple World Champion Gilchrist comfortably qualified top of his group before eliminating English trio of Brian Harvey (564-316), Chris Taylor (837-198 - Peter made a 391, which would be the highest of the competition) and an in form Rob Hall (515-392) in the Knockout Last 16, Quarter and Semi-Finals respectively.

​Causier himself was undefeated on route; relentless with a string of very heavy one sided victories after some clinical, blistering scoring.

However, he also exhibited his ability when trailing too. In his semi-final clash with Phil Mumford, David made a 149 unfinished break in just 11 minutes to win 501-470. He came to the table at the start of that visit 116 points behind!

With Gilchrist retaining his Irish Open crown, it was a similar story in the European Open (a level 5 ranking event with £6,060 total prize money), as Mike Russell (pictured above) defended the title with a bruising 1759-509 final win over Gilchrist; therefore stopping him claiming the Ivy Rooms double.

​The vastly decorated Russell emerged unscathed from his round robin group, and then broke through the thousand points barrier during L16 and QF wins over Irish duo Aidan Murray (1005-235) and Wayne Doyle (1197-403).

Gilchrist's bid for successive glories nearly came true; he also got the better of Causier again, this time by the far more convincing result of 1081-334 during the Last 4 stage.

​46 year old Russell made 25 century plus breaks throughout the tournament, including the highest of 601.