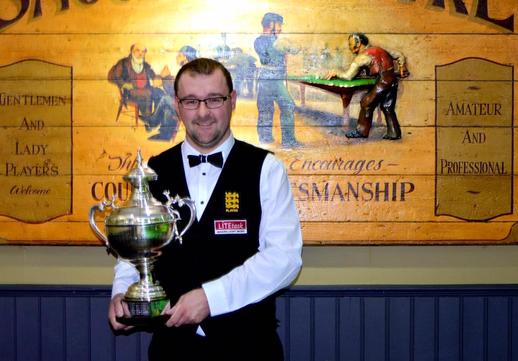 HALL TAKES IT ALL!

England's Rob Hall achieved an ambition of getting his hands on one of the most recognised and established trophies in his chosen sport for the first time; the World Billiards UK Open.

Resurrected as an 'Open' event only last year after an absence of well over a decade, this championship has been won by some of the most famous names in Cuesports such as Joe & Fred Davis, Geet Sethi, Mike Russell and many, many more.

40 players started the event, each split into 8 round robin groups of 5. The top 2 from each progressed to the Last 16 knockouts on the Sunday.

There were no shocks at the outcome of this initial stage, with all the top seeds and favourites advancing with relative ease.

Hall emerged as the Group B winner having won all of his four fixtures and registering a century in each.

He then notched up a brace of centuries in his 612-242 Last 16 success over Phil Davis, and then repeated the feat when eliminating Adam Clarke 618-328 in the quarters.

The 31 year old had a tougher time dispatching Robin Wilson 562 - 439 in the Last 4, but safely dismissed defending champion Roxton Chapman 913-427 in the final.

It was a brave effort from Chapman, who lifted the title last year despite it being his first competitive outing for five years due to a self-exodus. He also reached the final undefeated.

Written and published by Michael Day on the 31st March 2016​