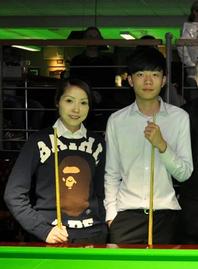 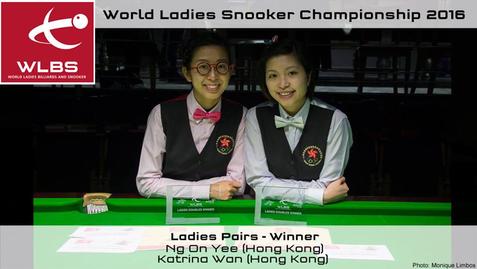 Cueists from Hong Kong have exclusively taken the top honours from the Pairs competitions during the opening two days of the 2016 World Ladies Snooker Championships.

The festival broke off on Thursday with the Ladies Pairs which featured a number of national partnerships.

But it was Katrina Wan & Ng On Yee who would win the title, with the loss of just one frame throughout the entire event.

Maria Catalano (England) & Tatjana Vasiljeva (Latvia) emerged from the top half of the draw after eliminating Diana Schuler & Diana Stateczny (Germany) 3-0, and then ousting Indian team of Chitra Magimairaj & Varsah Sanjeev 3-2 in the Last 4.

However, it would be Wan and On Yee walking off with the £480 first prize after a 4-1 final win which included a 55 break from the latter - the reigning Singles Champion.

Friday’s action would be the Mixed Pairs; a tournament which saw a group of current main tour professional men sign up with their female counterparts. There were some interesting combinations; 19 entries in all.

Home club professional Peter Lines paired up with last year’s World Runner-Up Emma Bonney. Despite winning their preliminary tie, they would bow out in the Last 16 to Vasiljeva  & Christopher Keogan 3-1.

That team would then upset the locals again when dismissing pre-event favourites Lines junior, Oliver, and On Yee 3-1 in the quarters. However, their run was stopped in the semi-finals by Jaique Ip Wan In & Kai Wa Cheung of Hong Kong 3-2. Cheung is the reigning IBSF World Under 18’s Champion, a crown he won in Russia last October.

The top half was conquered by Catalano and rookie pro Eden Sharav of Scotland; although not via the easy way!

Things started off comfortably enough for them with a 3-0 opening success, but were forced to a final frame decider with Yana Shut (Belarus, the IBSF Under 18’s Girls Champion) & James Cahill (England, World Number 104) in the Last 8.

Australia’s Oceania Champion Jessica Woods and Lee Shanker (England) also took them to a fifth frame in the following match. This encounter saw breaks of 49 by Shanker, 33 by Woods and 51 & 48 by Sharav.

The UK pair would bank the first frame in the best of 7 final, but the overseas stars won three on the spin to move just one away.

With their backs to the wall, though, Catalano and Sharav dragged themselves back into it with Frames 5 and 6.

The deciding frame was a very edgy and nervy affair which was completed just before 1am.

Under the pressure, opportunities were squandered from both sides and it was inevitably concluded on the colours.

In the end, a fantastic snooker laid on the blue by Ip Wan In would allow her teammate Cheung to sink blue and pink for the victory. They take the trophies and split the £680 winners purse.

For the consistent Catalano, it would be another final defeat, although she does have the immediate chance to put things straight over the coming days in the Singles tournament.

The highest break of the day was a fantastic 111 clearance by English Amateur finalist to be Jamie Bodle during his and Diana Schuler’s 3-1 defeat to the eventual winners in their first match.

The Singles starts on Saturday.

In a change to previous formats, the top 8 seeds will not feature until Monday’s knockout rounds. The first brace of days will be round robin group action, where the other octet of players will be discovered.

​Many thanks to WLBS for allowing us to use their photographs, really appreciated!


Written and published by Michael Day on the 2nd April 2016