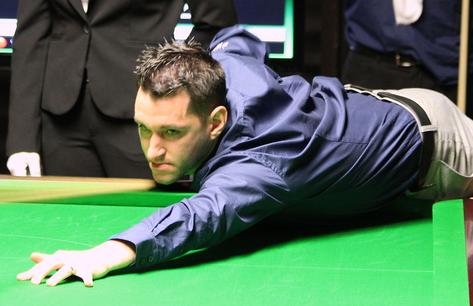 It was a high quality and dramatic opening day of the 2016 World Open from China, which produced 20 century breaks and saw 13 of the 23 matches go to either an eight or ninth frame.

All but Marco Fu of the World's current Top 16 competing on Monday advanced. Despite registering runs of 61, 73, 94 and 60, the Hong Kong star fell 5-3 to returning professional Sam Craigie, whom himself made 112 and 68 to initially go 2-0 up.

The turning point was certainly the conclusion of the 7th frame. Having won the last two to draw level, it seemed Fu was taking control. But a vital miss on the last green saw the 23 year old snatch it with a clearance on the black. It will be the first time that Craigie is set to appear in the Last 32 of a major ranking event, and the guaranteed £6,500 is his largest career payday so far.

Defending champion Shaun Murphy had no such worries with a 5-1 win over Sanderson Lam, and although Jimmy White opened up proceedings with a frame clinching 74, World Champion Mark Selby also progressed from the preliminaries with a 5-1 success over the legend. Selby top scored with 102.

Elsewhere in the 'Heldover' matches, Ding Junhui was made to work hard for a 5-3 victory over Michael Georgiou in what was his first appearance since the Crucible final in May. Ding trailed twice before the mid-session interval, but efforts of 71, 67 and 117 got him through.

It was a mixed bag for the four unfortunate pros who had to face a local wildcard.

Matthew Stevens continued his mini-revival with contributions of 121, 50, 52 and 109 in easing past Liu Yiqi 5-1, whilst Zhang Anda finished strongly with 79 and 83 in beating countryman Hu Hao 5-3.

However, veteran James Wattana lost 5-3 to Xu Si, as did Hammad Miah to Huang Jiahao by the same scoreline. In both matches, the top tier player led 3-2 before seeing the invitee notch up the last three.

Stuart Bingham ousted Stuart Carrington on the colours in a deciding frame finish after both had an opportunity to win it beforehand.

Barry Hawkins had to reel off the last trio of frames to survive 5-4 against the plucky Robbie Williams, and World Number 15 Kyren Wilson also had to turnaround a deficit in overcoming Zhang Yong 5-3. Wilson constructed a 105.

Brimming full of confidence from his maiden professional title in India a fortnight ago is Anthony McGill. The Scot stayed on course for another trophy with a comfortable 5-1 result over Lee Walker despite dropping the first frame. McGill fashioned a brace of tons with 106 and 109. It is already his 13th match win of the new season.

Another star in powerful scoring form was two-time World Champion Mark Williams; the Welshman totting up a 135, 77, 101 and 52 in dispatching Andrew Higginson 5-1.

The fourth player of the day to record a duo of centuries was David Gilbert, (100 & 127) as he swept aside Rod Lawler 5-0 - the only whitewash of the day. And the fifth was Michael White with runs of 125 and 120, although he would eventually lose in nail-biter 5-4 to Kurt Maflin, whom himself made a 115.

On home soil, Xiao Guodong carries on his bright start to the season after nudging out Stephen Maguire in a final frame of their quality encounter (XG 124, 59, 60 / SM 61, 70, 133). Another Asian to go through was Thailand's Thepchaiya Un-Nooh; he launched a recovery from 4-2 down to deny Mark King in a ninth frame too.

But perhaps the story of the day was the sensational comeback exhibited by Tom Ford (pictured above) during the afternoon session in Yushan.

Seemingly down and out after breaks of 82, 51 and 72 saw his opponent Mark Davis go into the mid-session interval 4-0 up, the Leicester cueman returned from the break to produce a breath-taking period of scoring.

The Last 64 will reach its conclusion on Tuesday.

Written and published by Michael Day on the 25th July 2016