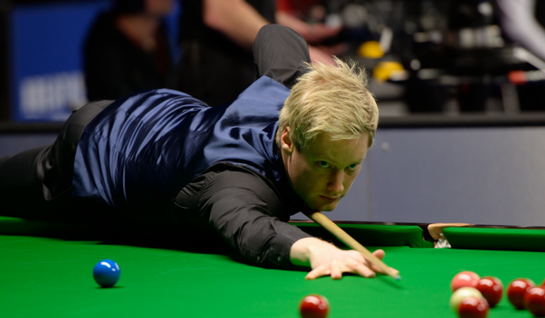 12 of the World's current Top 16 remain in the 2016 World Open following the conclusion of the Last 64 on Tuesday.

That statement is more impressive when you consider Mark Allen and Ronnie O'Sullivan gave the event a miss, although tempered perhaps with the fact that both Judd Trump and Joe Perry received walkovers in China. (Yu Delu was ill and Jamie Burnett did not travel).

Defending champion Shaun Murphy has wasted little time progressing to the Last 32. After a 5-1 result on the opening day, he today eliminated home star Cao Yupeng 5-2 with the aid of an 81 and 59.

World Champion and Number 1 Mark Selby was locked 2-2 with Alfie Burden, but after the mid-session interval he restricted his fellow Englishman to just 2 more points in a 5-2 win.

Last month's Riga Open champion Neil Robertson is now on a nine match winning streak for the start of this new season after a 5-2 defeat of Ian Burns. The Australian was once again in powerful scoring form as he constructed breaks of 102 and 106 in the process.

Remember, Robertson was 3-0 down to Sydney Wilson in qualifying at Preston before coming through 5-4. In 2013 and 2014 he reached the final of the first two major ranking events he entered - can he do it again here?

Successes for John Higgins and Ricky Walden made it a clean sweep for the sport's elite banding on Day 2.

​Higgins crafted breaks of 116 and 112 in beating the promising Oliver Lines 5-2 and Walden - searching for a fourth different Chinese major, was fairly untroubled against David Grace, 5-1.

In a real tight affair, where there was not a single half century break made, Ali Carter ground out Mike Dunn 5-3, whilst in-form Michael Holt withstood a very strong start from Fergal O'Brien (breaks of 127 and 68) to claim five on the spin for a positive 5-2 outcome. Holt himself racked up runs of 85, 62 and 75.

Without doubt the upset of the day was Malaysia's Thor Chuan Leong's 5-3 comeback win over Belgium's Luca Brecel.

Thor watched his opponent compile consecutive runs of 64, 56 and 66 to go 3-0 up before himself chalking up a trio of 50 pluses in turning the tie completely around.

Although having had some really decent runs on the European Tour last season (which kept him his pro card), this will be the first time Thor is to feature in the Last 32 of a major ranking event. The guaranteed £6,500 will also be his biggest payday so far.

There was just one deciding frame finish on Tuesday compared to six from Monday (there were more matches yesterday, though). This was Graeme Dott's narrow victory over Duane Jones.

It was a quality affair between the two. Jones fashioned efforts of 81, 79, 63 and 66 - a break for every frame he won. However, he was eventually denied by the former World Champion in a reasonably close ninth frame. Dott notched up contributions of 139 (the joint highest this week so far) and 111. He is the 8th player already here to have made multiple centuries in a match.

The other result in China today was Matthew Selt's 5-2 win against Matthew Stevens. Selt trailed 1-0 and 2-1 before taking the last four in a row.

Written and published by Michael Day on the 26th July 2016